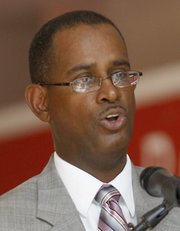 Mr Turnquest also revealed the search for a company to provide closed circuit television (CCTV) in New Providence, which began a year ago, has ended.

The announcement came as he spoke to hundreds of police officers at the Royal Bahamas Police Force's (RBPF) annual church service at Rhodes Memorial Methodist Church.

Mr Turnquest said: "I am advised that the Commissioner and his Executive Management Team will soon conclude their interviews and assessment of determining those officers who are most deserving of promotion to the various ranks at this time.

"The Commissioner has provided me with the rank organisational structure for the effective operation of the Force and I wish to underscore that the promotional exercise will be within the context of meeting the deployment requirements of a properly structured Police Force.

"I assure you of fairness in the exercise, however there may be some police officers who are deserving of promotion that may not be able to be accommodated at this time, due to positions not being available within their next rank."

During yesterday's address, Mr Turnquest said the implementation of the CCTV network will greatly assist the police in their fight against crime in 2012.

"I am pleased to announce that the Government has approved the company who successfully tendered to provide for the implementation of the Municipal CCTV project in New Providence. A formal announcement in this regard will be made shortly," he said.

"This multi-million dollar CCTV network is expected to be more than a crime prevention tool; it is intended to also act as a deterrent to criminals and would-be criminals. It is the Government's expectation that the system will become fully operational by mid- 2012."

Mr Turnquest said those statistics reveal unacceptable levels of crime, particularly violent crimes and crimes against the person. He said a significant percentage of the crimes, particularly homicides, are associated with the illicit drug trade and the use of illegal firearms.

"The issue of drugs will be comprehensively addressed as we continue to tackle this vexing problem. The Bahamas National Anti-Drug Plan for 2012 to 2016 is currently being reviewed by stakeholders and it is expected that the Plan will be finalized and approved by the end of this month," he said.

"The Plan outlines a comprehensive strategy to address, in a collaborative and cohesive way, all aspects of the illicit drug problem, including production, trafficking and misuse."

Mr Turnquest also used the opportunity to impress upon those officers present the importance of enforcing the laws of The Bahamas without fear or favour.

He said: "All police officers must know that no politician or any other individual who believe they may have influence, is to tell you who to charge or not to charge for an offence. You are required to do your job professionally and once you have the evidence to charge an individual for an offence, you must proceed with doing your work, confident of the fact that no harm whatsoever can come to you for doing your job."

Also speaking at the church service was Diocese of The Bahamas and Turks and Caicos, Bishop Laish Boyd, President of the Methodist Church in the Caribbean and the Americas, Rev Livingstone Malcolm and President of the Bahamas Christian Council, Rev Dr Ranford Patterson.