THE Democratic National Alliance used the occasion of the 45th anniversary of Majority Rule to emphasise the importance of change. 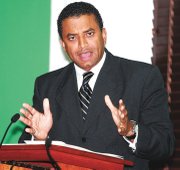 In a statement issued yesterday, the DNA said it acknowledges what Sir Lynden Pindling and many like him realised as they fought for a new Bahamas -- "that change is necessary for the preservation of our people and for the progression of this nation".

The statement said: "This anniversary comes on the heels of Sir Clifford Darling's home going; he was among a fearless slate of young men who played a pivotal role in garnering the 'majority' support.

"Among other great feats, these two men represent what Bahamians often overlook -- they represent the common man that believes in his abilities and, moreover, believes in a better Bahamas.

"Therefore, the DNA joins all Bahamians, wherever their political allegiance lies, who believe in this country's potential and the part they must play in recognising our forefathers, their sacrifice and the rights that we enjoy today."

Bamboo Town MP and DNA leader Branville McCartney said that Sir Lynden and Sir Clifford are symbols of the fact that average Bahamians -- from the college graduate to the taxi driver -- can inject significant change into the country.

"Today, we stand on the wings of these great victors and their ability to soar with excellence, bearing the heat in the burden of the day and when the odds were against them, they remained focused and resolute in their conviction that a change of the guard was necessary," Mr McCartney said.

The DNA leader said he hopes Bahamians will reflect on the Bahamas that these men sought to create on the day we honour as Majority Rule Day, "and resurrect Sir Lynden, Sir Clifford and like-minded men in our own selves."

"That, in itself, would be the best way to honour them. Only then would their efforts not be in vain," he said.