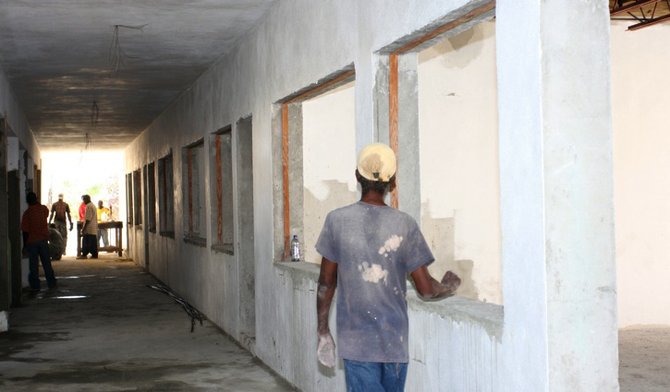 Workers at the school.

STUDENTS and teachers at C H Reeves Junior High School will soon have several extra classrooms at their disposal.

The government has awarded a $345,932 contract to Bruce Rahming Construction for a two story, eight-classroom building on the Robinson Road campus.

The contract includes construction of a library, restrooms and an administration office, as well as demolition of some existing buildings.

Minister of Public Works and Transport Neko Grant said the classroom building is "long overdue" and is part of the government's master plan for upgrading the school.

He explained that in 2006, contracts were awarded to the New Day and Leon Roker construction firms to build two eight-classroom buildings on the school's campus.

"New Day Construction completed the building for which they were contracted to the satisfaction of my ministry and the Ministry of Education," said Minister Grant. "However, the same was not the case with Leon Roker Construction. This contractor made numerous construction errors and before completion of the building abandoned the project."

The contract was terminated in July 2007. Reg Hunt Construction was later contracted to undertake remedial and correctional works to the classroom building, Mr Grant said.

"We expect that the construction works will be of a consistently high standard with on-time completion and within budget. We look forward to the classroom

Mr Grant expressed appreciation to Mr Forbes and other staff in the ministry's technical team for their assistance in advancing the project.