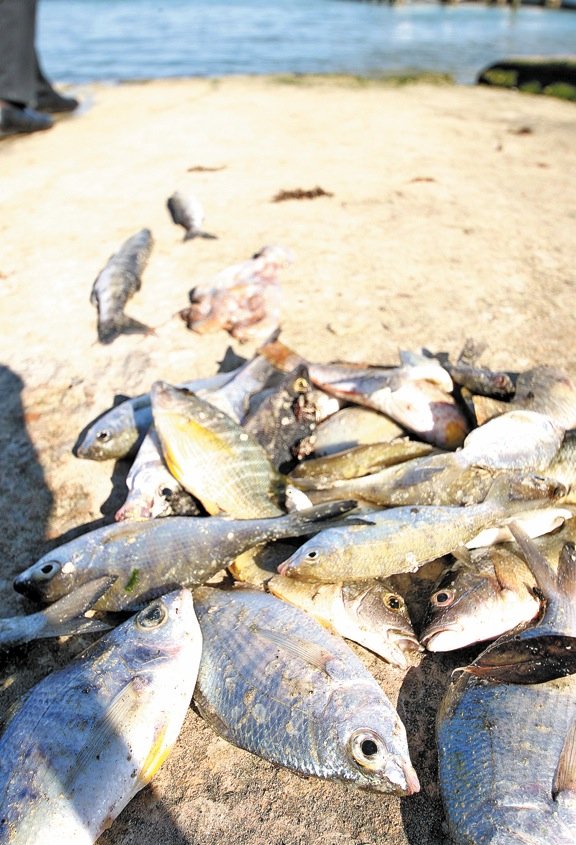 FISHERMEN were left stunned after hundreds of fish were washed up dead or dying on to the shores of Montagu beach, yesterday.

Octopus, parrot fish, grey snappers, and barracuda were among the species found dead by fish vendors sometime after 10am.

Seagulls had gathered around the harbour, eating the fish that appeared "disorientated" as they swam along the surface of the water before making their way to the shore.

Michael Brennan, director of marine resources, visited the site and reported a "considerable" amount of dead marine life. He called the situation "a complete mystery" and believes contaminated water may be the cause.

Fisherman and vendor Milton McPhee said when he arrived to work in the morning he noticed "a lot" of fish lying on the shore.

"When I took a closer notice, I saw that the fish were actually dying. They were disorientated and acting as if they were oxygen-deprived," Mr McPhee said.

"You see even more on top of the water swimming in circles and on to the shore as if something is chasing them, that's a sign of disorientation."

"We tried putting them back but they just circle for a minute or two and then die," he said.

Alan Brown, of the Montagu Vendors Association, said: "When I came out, I noticed a flock of birds out to sea just picking the fish off the water."

Noting the number of dead species on the shore, Mr Brown said: "We want to find out what's going on - this isn't normal. We need to know what's causing the fish to die and if it's a danger to human consumption.

Another fisherman said: "Something scary could be out there. They jumping out the water like they don't want to be in the water."

Mr Brennan has "no idea" as to what might be the cause of the dying marine life, but said the Department of Marine Resources will be gathering information.

"Some of them appeared as fish sometime appear if they are exposed to some kind of contaminant," he said. "The numbers (of dead fish) were considerable - large numbers, it certainly does from appearances look like a contaminant."

Mr Brennan said the Environmental Health Department is responsible for collecting water samples for testing and confirms they were notified of the situation.

The beach is presently undergoing renovations which led some fishermen to speculate something from the construction site could be the contaminate.

"It could be a sewage line or some chemicals in the water there," Mr Brown said. "The drain they dredged (on the construction site) was full with water so maybe when the tide went out, that stuff went out with the tide and contaminated the water. That's what some of the fishermen are thinking. We need to know because it's a serious situation."

Captain Cyril Roker, the acting controller of the Port Department who spoke to the press at the scene, said the department was still in its "preliminary assessment," and would not offer any information on the situation.

"We've called the relevant authorities so they can come do their proper assessment," he said.

Assistant Port Controller, Craig Curtis, said that the dying fish "poses a grave concern" and "it will be interesting" to see what marine biologists conclude.

The Ministry of the Environment and the Department of Environmental Services last night refused to comment.