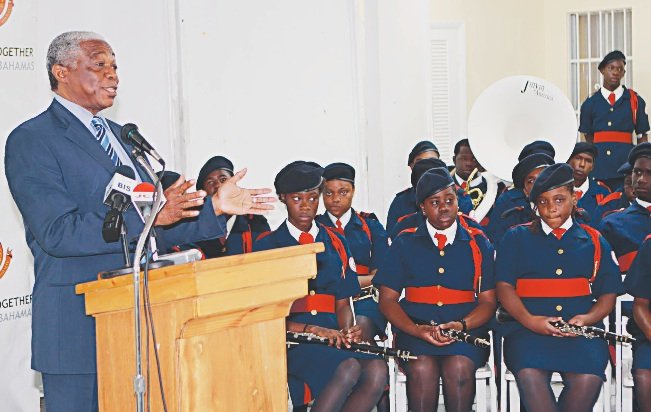 Dr Nottage said society has a responsibility ensure every child has at least a high school education.

He made the charge to law enforcement officials at the opening ceremony of the Bain’s and Grants Town Urban Renewal Village Keepers Seminar.

Dr Nottage said: “We have these principals who put people out of school (and) who have no back-up for them. They don’t seem to care and these young people get into trouble.

“I am one of those who believes that we don’t have the right to suspend people from school without providing them with an alternative.

“We have the priority to ensure that every single child has at least  a secondary education in some form or another.”

He said institutions such as the Bahamas Technical and Vocational Institute (BTVI) should offer skills training to children who do not fit in the regular school system.

“My problem with that is the entry requirements that are being put in place for BTVI makes it out of reach for people who don’t have a basic education. So we have to look at that.

“They seem to be trying to turn BTVI into a community college when it was set up as a skills training centre, “ Dr Nottage said.

The National Security Minister, who is also the MP for Bain and Grants Town, revealed his plans for the area, which include a skills training centre.

“We want to try to get people back into school and to reduce expulsion. We do know that there are some people with behavioural problems who just would not fit into the normal school population, for them we are going to try to provide some skills training in the Bain Town community.

Although those plans are still in the early stages, Dr Nottage said Bain and Grant’s Town Urban Renewal executives already have a list of volunteer instructors as well as buildings in the area that could facilitate the programme.

How could Dr. Nottage expect the school administration to have alternative means for when they suspend or expel a student. If a students finds him/herself being suspended, then the school has done its best and must focus on the student whom know how to conduct themselves in a learning environment. Yes alternative means of education or skill training is needed but that should not fall under the schools administration task. What next, security guards should be the ones to chase down armed suspects. As for BTVI, thats good they are using an entry level requirement to filter out distractions and set-backs from individuals whom want to learn a trade/skill. Furthermore whats wrong with trying to turn BTVI into a community college, your Bahamian people dont deserve a higher level of education. Wouldn't it be better for young Bahamians to obtain a certificate that enables them to start their own business more so than to just try get a job.

no it seems the goal is to make entry into everything easy as can be ,and to baysit our youth with police officers for 10 to 12 yrs so they can get a certificate of completion . you never want to seem to insult your political base by telling them they need to do better ,so you make the test easier or no test at all ..

Are they saying that lousy academic students will automatically make good masons, carpenters, tradesmen etc? We need students who are serious about these fields too. Don't need anymore tradesmen who are a disgrace to their fields, thank-you. Stop settling and expecting Bahamian people to settle for rubbish as well!