A MAN accused of stabbing his ex-girlfriend at a traffic light walked free from a possible life sentence after a Supreme Court jury acquitted him of attempted murder. 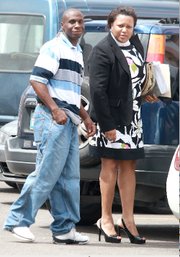 Devon Adderley with his attorney Ramona Farquharson, after being acquitted of murder.

Devon Adderley, 26, of Mermaid Boulevard, was unanimously acquitted of the charge yesterday where the victim of the attack was his ex-girlfriend, Lashan Smith.

In yesterday’s proceeding, the end of the trial, Justice Roy Jones summed up the evidence before excusing the nine-member jury to decide on a verdict and they returned with a unanimous 9-0 not guilty.

The jurors, before they were excused, were also asked to consider the lesser charge of causing harm. They again found him not guilty unanimously.

Adderley was accused of attempting to murder Lashan Smith on the eve of Valentine’s Day last year.

The court heard last Tuesday from prosecutor Eucal Bonaby, in his opening address, that the accused followed her in a borrowed car from church to a traffic light and stabbed her with a knife.

Last Thursday, Smith raised her shirt for the jury to see the wounds under her arm and on her back. The 24-year-old Smith named her ex-boyfriend as the man who attacked her at a traffic light, telling her: “I’m going to kill you! I don’t want no other man to have you! I’m going to kill you!”

On Tuesday, Devon Adderley told the court that it was Smith who had pulled the knife on him first and cut him before he took the knife and retaliated, admitting he was a “little” angry because of Smith’s attitude and actions of late in their relationship.

On Wednesday, counsel in the case addressed the jury.

Defending attorney Ramona Farquharson-Seymour addressed the jury first and told them that the prosecution did not present a strong case for a number of reasons.

She said, despite the Crown presenting photographs of the scene showing blood, they did not present any report or DNA evidence to prove that the blood only belonged to Lashan, as her client also claimed he bled after being attacked first with the knife.

Regarding the knife, the attorney said the police should have photographed and examined it for fingerprints, which would have helped their case to prove who its owner was – Adderley or Smith.

Regarding Smith’s injuries, she said the Crown did not present any medical evidence showing they were life-threatening.

The attorney also said one of the witnesses admitted in court to lying about what she saw take place. Mrs Seymour said the victim herself could not be fully believed based on some of her evidence and the way she hesitated to answer questions.

She said the charge against her client is a serious one and that the prosecution did not prove its case.

Prosecutor Eucal Bonaby maintained that Devon Adderley intended to murder Smith. He referred to the defendant’s statement to police, in which he reportedly owned up to being in possession of the knife used in the stabbing, contradicting what he had told the court.

He said officers happening to arrive on the scene was a case of “divine intervention” that saved the life of Lashan Smith.

Mr Bonaby also said that Adderley’s response to an officer who asked why he had stabbed Smith did not make sense for someone claiming self-defence.

He said instead of saying: “‘Because she cause me almost get lock up three times,’ he should’ve said ‘She attacked me first with the knife.’”

Regarding Smith’s injuries, Mr Bonaby said it doesn’t take a medical expert to know the seriousness or the extent of what could have happened had officers not intervened.

He said the injuries about her body, especially on her back near the rib cage and lungs, should lead jurors to an inference of her attacker’s intentions based on their own common knowledge of biology and anatomy.

The jury, having considered the evidence, and the submissions by counsel, were unanimously convinced that Adderley was not guilty of the crime for which he stood trial.

Unbelievable that this criminal could walk away free after what he did to that girl.

Having gone through the courts procedure, he could no longer be regarded a suspect nor a criminal. However there was a Throne publicly announced to be missing (regarded as stolen) and was found by police, confessed to have been moved by an individual whom carried it (the throne) to his own location but that was never termed unbelievable that this criminal could walk away free. Or lets stick to the stabbing trial; a key witness went into court and was proven to have been giving untrue stories under oath, yet she walk away free. According to the judge and jury he is innocent so believe it, life goes on.

what a trip with the throne ,its just like it never happened