New ‘King’ Of The Quarter-Mile 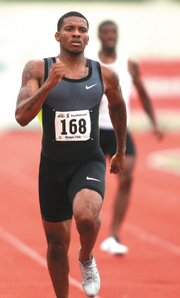 THE BAAA purposely switched the men’s 400 final to the last event on the Scotiabank National Open Track and Field Championships’ calendar and Demetrius Pinder delivered a victory for the history books on Saturday night.

In a personal best performance of 44.77 seconds, the Grand Bahamian native blazed through the one-lap race at the Thomas A Robinson Track and Field Stadium for his third consecutive triumph to earn the title as the new ‘king’ of the quarter-mile.

The marquee event was so fast that both runner-up Ramon Miller (another PB of 44.87) and former champion Chris ‘Fireman’ Brown (45.19) all went under the Olympic Games’ A qualifying standard of 45.30 as they finished in the same order as last year’s championships in Grand Bahama.

“It was a competitive race. I just wanted to stay focused and stay in my race plan,” said Pinder, who was the only qualifier to dip under the 45-second barrier in 44.94 on Friday night. “I just wanted to get out with a fast start and try to maintain it. I did that, came out strong and finished out on top.”

On the fast time, Pinder said: “I knew our Bahamian guys are capable of anything. I wasn’t downing anybody. Didn’t know what time we would come up with. But I knew it would be fast.”

Pinder, running out of lane four, made up the stagger on Miller on the back stretch. But coming off the final curve, Miller and Brown, who sat back and watched it all unfold, made a gallant comeback.

It just wasn’t’ enough as Pinder crossed the line holding up his hand in victory for the third consecutive year. Miller, the ‘sleeper’ in the field, said he gave all he had and he was pleased with his effort.

“I came into the race with a planned race and I executed my race,” said Miller, who hopes that he can now get the credit that he deserves. “Even though I didn’t get the victory, I executed my plan and I hope to keep it going into the Olympics.

“This year is a different year. I’m prepared and I’m sticking to my plan. I’m praying to God that everything goes as planned.”

The self-coach Miller said this was a big feat for him. He said: “It’s up to me. If I fail, it’s me. I’ve been blaming people every year. But this is my time to overcome everything.”

Brown, who hasn’t tasted the thrill of victory since 2009 when he held off Miller, said he now has to go back to the drawing board and get ready for the next time he faces his arch rivals.

“I just give God thanks for allowing me to come out here and perform and give the fans something to cheer for,” the Eleuthera native said. “I wanted the win, but it didn’t happen today.

“I’m sure we’ll buck again in Europe or at the Olympics. That’s the main focus. The focus here was just to come out and get a good time under my belt, win, lose or draw. I just did that.”

Not underestimating the field, Brown said he just simply took too long to make his move when Miller started to chase Pinder and it cost him dearly down the stretch.

“The Olympics is going to be a whole different ball game than here,” Brown said. “I just have to work on my speed and just be ready for my next race on July 14.”

Brown would have needed to run the Olympic A qualifier of 51.55 to make the trip to London as Shaunae Miller has also produced 51.25, a new junior national record. Miller was one of the many elite athletes exempt from competing in the Nationals for medical reasons.

“I went out there and I executed well,” said Brown, who had the fastest qualifier of 52.80. “I prayed the entire time. I executed the way I wanted. It was a tough field, so I was pleased. It was a personal best in two days.”

Lanece Clarke took second place in 52.80 to hold off 2009 champion Christine Amertil, who is making a comeback after taking the past two years off.

In the consolation men’s final, Pascal Orelus of the Republic of Haiti won in 46.79. Alonzo Russell was second in 47.16, followed by Danzell Forston in 47.72. Andretti Bain, making his back after a second place finish in 2010, was fourth in 47.76.

Both the men and women’s 800 meters saw two outstanding performances from Andre Colebrooke and Te’Shon Adderley as they went under the NACAC and World Jr qualifying standards respectively.

Oneil Williams and Hughnique Rolle produced double victories in the distance races for the men and women, but neither qualified for any of the national teams.

“During my (training) sessions in Kenya, I got a hamstring injury and I tried to nurse it before I came home, but that didn’t help,” said Williams, who spent the past five months in a distance training camp.

“So I was avoiding speed work because I didn’t want to reinjure the hamstring. I was very pleased with the training sessions and the environment. I really want to go back and continue my training because I don’t have any competition here.”