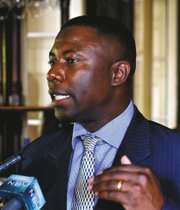 COST will be a major factor in the Government's decision on whether or not to reverse the one-way traffic system on Baillou Hill Road and Market Street, a government official telling Tribune Business yesterday that the impact it would have on traffic management also had to be taken into consideration.

Parliamentary Secretary in the Ministry of Works and Urban Development, Renward Wells, said: "I think what the Bahamian people ought to be mindful of is that the construction of these roads cost us an awful lot of money. The way these roads are constructed, they have been constructed in a way that traffic flows one way on Baillou Hill, and one way on Market Street."

Mr Wells added: "For us to change that we have to look at the cost given the Budget deficit that we have. There is going to be a cost if we were to proceed in that direction.

"At the end of the day we are looking at the overall traffic management of the island, why it was that it was moved one way in those directions, and if it was reversed and how that affects the overall traffic management on the entire island. There were studies done as to why they did it the way they did it. We are stuck with the cost issue, and so those things are what we are factoring in."

Members of the Coconut Grove Business League (CGBL) are aiming to meet with Minister of Works and Urban Development, Philip Davis, in a bid to reverse the one-way traffic system on Baillou Hill Road and Market Street.

The CGBL, a group of some 50 businesses, took their fight against the one-way traffic system to court, and last December secured a victory in the Supreme Court against the Government over the road changes, only to see that decision overturned by the Court of Appeal. A spokesman estimated that losses suffered by businesses on Baillou Hill Road and Market Street due to the traffic system reversal could be around $40 million.