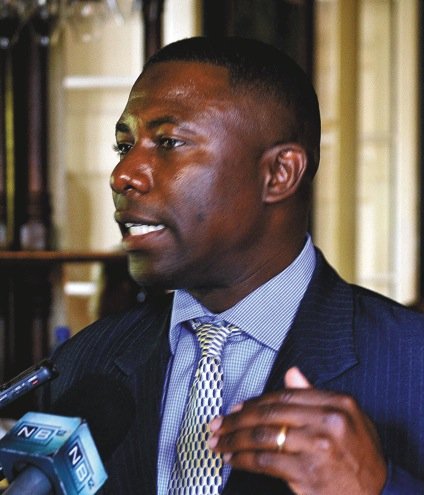 TRANSPORT and Local Government Minister Renward Wells yesterday announced his ministry has launched an investigation into claims of a mass shredding exercise underway at the General Post Office.

THE relocation of the general post office to the Town Centre Mall is now expected to be completed by January 1, 2019 and on budget, Transport Minister Renward Wells has revealed.

A Cabinet Minister yesterday said he intends to “push” for Bahamian involvement in designing, constructing and managing Nassau’s cruise port, while revealing that the Government is exploring the possibility of a port in Mayaguana.

A Cabinet Minister yesterday said he expects the General Post Office’s relocation to be completed before Christmas, adding that it would be “inconceivable” to allow its woes to continue into the New Year.Speaking outside Parliament after tabling a re

'Stop drinking and texting while driving'

TRANSPORT Minister Renward Wells yesterday said the decision to amend the Road Traffic Act to make it illegal to drive or operate a vehicle while using a cell phone, or with an open alcoholic beverage is related to the “increase” in traffic fatalitie

THE Port Department yesterday moved to seize vessels owned by Four C’s Adventures after it was reported the Exuma tour company had resumed operations in contravention of a government order.

THE CAUSE of the fatal Exuma boat accident which occurred more than a week ago has yet to be revealed, Transport Minister Renward Wells told The Tribune yesterday.“The investigation is ongoing,” he added. Elliot Lockhart, QC, attorney for boat owner

Audit ongoing into BAMSI - but no date for release

AGRICULTURE and Marine Resources Minister Renward Wells is under fire for comments he made last week concerning the potential shortening of the Nassau grouper closed season, with local environmental groups and international advocates condemning the p

‘Wells was sacrificed in letter of intent row’

FORT Charlotte MP Dr Andre Rollins went back on the offensive yesterday accusing the Christie administration of sacrificing Bamboo Town MP Renward Wells in the letter of intent controversy in a bid to protect senior party members who orchestrated the signing.

DNA Leader Branville McCartney yesterday questioned the Free National Movement’s decision to make Bamboo Town MP Renward Wells leader of opposition business in the House of Assembly despite not knowing the full story surrounding his controversial signing of a $650m letter of intent with Stellar Waste to Energy while a member of the Progressive Liberal Party.

BAMBOO Town MP Renward Wells has been appointed leader of opposition business in the House of Assembly, replacing Central Grand Bahama MP Neko Grant who resigned from the post last week in the aftermath of the Free National Movement’s divisive convention.

Wells to ‘proudly’ vote no on bill four

Wells: I would not have stayed with PLP if I had been in Rollins’ position

ALTHOUGH he opted to stick by the decision he made to remain in the Progressive Liberal Party, Bamboo Town MP Renward Wells said he would have acted no differently if placed in the same position as his fellow MP Dr Andre Rollins.

BAMBOO Town MP Renward Wells yesterday told reporters that he contemplated resigning from the Progressive Liberal Party as recently as last week while insisting that “all things were possible” regarding whether he would quit the party ahead of the 2017 general election.

Will Wells stay or go? He says watch his speech

BAMBOO Town MP Renward Wells would not comment yesterday on whether he plans to resign from the Progressive Liberal Party (PLP) but urged the public to pay attention to his speech in the House of Assembly today.

BAMBOO Town MP Renward Wells said during a House of Assembly session yesterday that the past few months have been “somewhat tumultuous” for him.

Wells ‘still has to give an explanation’

Renward Wells: Why I signed letter of intent

BAMBOO Town MP Renward Wells said last night he signed the $600m letter of intent with Stellar Waste to Energy Bahamas in order for the company “to carry out studies” free of charge to present to Cabinet.

Wells ‘will not speak about letter of intent’

BAMBOO Town MP Renward Wells has said he would not speak in the House of Assembly when it resumes on the controversial $650 million letter of intent with Stellar Waste Management insisting that “nothing else needs to be said” because he has sufficiently explained his position in the past weeks.

Wells: PLP and country will see power of one MP

BAMBOO Town MP Renward Wells yesterday suggested that the Progressive Liberal Party and the country will see the “power of one MP” when the Constitutional Amendment Bills come to a vote in the House of Assembly.

FORMER PLP Cabinet Minister George Smith yesterday shot down Bamboo Town MP Renward Wells’ resignation threat saying that he did not have the political clout to “stand on a bully pulpit and talk tough”.

FORT Charlotte MP Dr Andre Rollins believes Bamboo Town MP Renward Wells is a victim of a leadership struggle between Prime Minister Perry Christie and at least one other member of the PLP.

PRIME Minister Perry Christie last night confirmed that Renward Wells will address the nation on the Letter of Intent controversy.

PRIME Minister Perry Christie said yesterday that he will “imminently” address the controversy surrounding Renward Wells’ signing of a letter of intent with Stellar Waste Company LTD to build a $650 million facility at the New Providence landfill.

BAMBOO Town MP Renward Wells yesterday said he was prepared to step down as parliamentary secretary in the Ministry of Works and deputy party whip if the referendum Bills were not revised.

PM says Wells row will be answered – when government ready

PRIME Minister Perry Christie has said that his government will provide answers on the controversy surrounding a letter of intent for a $650 million facility reportedly signed by Parliamentary Secretary Renward Wells in due course.

A FORMER Progressive Liberal Party Cabinet minister said Ministry of Works Parliamentary Secretary Renward Wells was “ill advised” before he made the “mistake” of signing a letter of intent with Stellar Waste to Energy Bahamas to build a $650 million facility at the city dump.

Wells 'being treated as a fall guy' over $650m deal

FREE National Movement (FNM) Leader Dr Hubert Minnis said the government is using Ministry of Works Parliamentary Secretary Renward Wells as a “fall guy” by asking him to resign amid reports that he breached government protocols by signing a letter of intent with a company proposing a more than $650m waste-to-energy deal.

THE Government is pushing to have at least 40 per cent the Bahamas’ energy needs come from renewable sources by 2030, a senior official said yesterday, telling Tribune Business that it “makes good sense” for the country to move in that direction.

COST will be a major factor in the Government's decision on whether or not to reverse the one-way traffic system on Baillou Hill Road and Market Street, a government official telling Tribune Business yesterday that the impact it would have on traffic management also had to be taken into consideration.