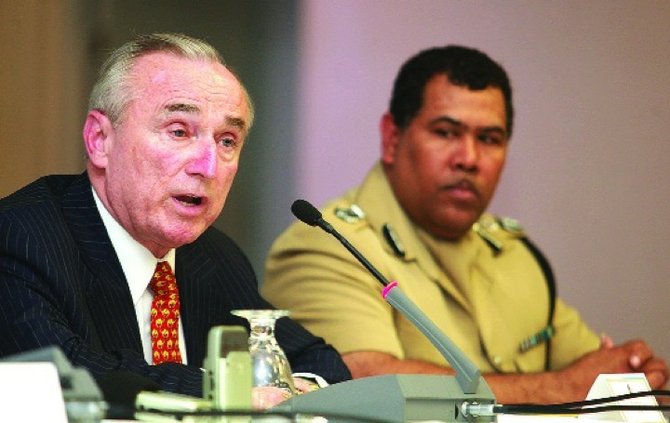 Mr Bratton arrived in the country on Tuesday after being invited to advise Bahamian police on effective ways of reducing crime.

In a press release, the PLP said "Bratton represents the FNM's latest last minute, superficial attempt to persuade Bahamians that they care about crime."

The opposition dismissed the visit as a "media gimmick" and challenged the government to address crime "all the time and not just at election time."

Minister Tunrquest said the visit was not political, and that great ideas and solutions came from the discussions.

"We are very pleased with the level of discussions that took place with former police commissioner William Bratton .

"All my discussion with the police indicated that they found it most useful. He has obviously had varied experiences in two of America's largest cities - New York and Los Angeles," he said.

Speaking with the press on Tuesday, Mr Bratton said the issue of crime continues to be one of the biggest concerns, not just in the Bahamas, but all over the world.

"It has been my experience that to effectively deal with crime you must have a strong leadership and your Prime Minister has made it clear that it is one of his top priorities. When dealing with crime you cannot rely on looking inward but rather to the shared experiences of other nations on an issue we all share because potential solutions and resolutions can be shared."

Mr Bratton also praised the police force for their COMSTAT room, which he said is on par with those in New York and Los Angeles.