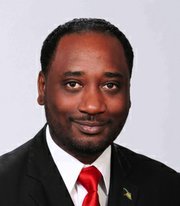 During the Advanced Poll held yesterday at the College of the Bahamas, Mr Stuart said Bamboo Town incumbent Branville McCartney will not be re-elected as the representative for Bamboo Town on election day.

"I think Branville McCartney will be gone," he said, "I think the seat will remain and revert back to the FNM.

"It was traditionally an FNM seat - the PLP does not have much support, not much to talk about in Bamboo Town, we will win this seat most definitely."

Mr Stuart said while he was unable to meet with everyone in the Bamboo Town constituency he has worked hard in the area.

"We are excited and we believe that this seat will remain FNM," he said.

Speaking with the Tribune, DNA leader Mr McCartney said he is looking forward to next week's results, with the advanced polls going smoothly and the DNA receiving positive support.

He said: "I am happy with the persons who are voting, I've had an opportunity to go around all of the different polling stations and we've been getting some good support."

Encouraging voters to be courteous to each other, Mr McCartney said based on the individual parties platforms, Bahamians have a right to vote for the party of their choice.

He said "I know there have been one or two incidents out there, we need to make sure we respect each other's position notwithstanding their political affiliation, everyone has a right to vote for whom they wish, I think that ought to be respected."

Advanced Poll voters for the constituency gave mixed opinions on who they felt would be successful in hotly contested seat.

A male Bamboo Town constituent said he believes Mr McCartney brings something new to politics and will continue to support him.

He said: "I'm not sure [who will win] but I'm going to vote for Branville. I'm just tired of them two, the FNM and the PLP, the two of them are basically one in the same."

Another voter said while he thinks Mr McCartney has done a good job as representative for the constituency, people will vote along traditional party lines, PLP or FNM.

"From what I saw, Branville did a fairly good job," He said.

"I don't know if that is the result that he was an FNM Member of Parliament or because he is now a part DNA, but from all indications I believe the race is going to be little tight - at the end of the day I believe it will only be close between two (PLP and FNM), most people when they get in this situation tend to vote for the party, not personalities," said the resident.

McCartney will lose his deposit.

i thought bamboo town is currently an independent seat, so how can it remain FNM

i don't think Branville McCartney will win at all