THE PLP came out the slight winner of The Tribune's exit poll at yesterday's advanced vote. 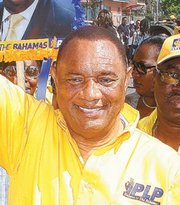 Of the nearly 8,000 voters eligible to cast their ballot yesterday, 72 identified themselves as PLPs and 55 as FNMs, with 31 saying they support the DNA.

The polling conducted took place outside of the Kendal GL Isaacs and the College of the Bahamas' stations over the span of four hours and is not equally representative in the numbers of persons interviewed per constituency.

Of the six constituencies that were highlighted in this straw poll, the PLP were victorious in five: namely Elizabeth, Yamacraw, Bamboo Town, Mt Moriah, and Tall Pines. Carmichael was the only seat that they lost to the FNM in the advance poll exit numbers.

In Elizabeth the breakdown appears as follows: 27 in favour of the PLP's Ryan Pinder, 20 for the FNM's Dr Duane Sands, and nine for the DNA's Charlene Paul.

In Yamacraw, the PLP's candidate Melanie Griffin secured seven votes, six to the FNM's Dion Foulkes, and four for the DNA's Maurice Smith.

In Bamboo Town there is a virtual dead-heat with two votes dividing first from third, with the PLP's Renward Wells in the lead with 10 votes, to the FNM's Cassius Stuart with nine, and eight for the DNA's leader Branville McCartney.

Mount Moriah has the PLP's candidate Arnold Forbes out in the lead with 18 voters polling having supported him, to the FNM's Tommy Turnquest's 11. The DNA's candidate, Wayne Munroe had eight.

In Carmichael, the PLP's Dr Daniel Johnson polled with four votes to the FNM's Darron Cash with six, and two to the DNA's Theofanis Cochinamogulous' two.

Readers should bear in mind that yesterday's advance polling is representative of only those persons who were scheduled to either work, travel, or otherwise were unable to vote on the May 7 general election, and may not be a true representation of what could be expected at the polls.

While not all persons interviewed would come out and say who they voted for, when asked if they approved of the direction the country was headed said "hell no."

One voter said despite voting for the FNM and the PLP in previous elections, the new party has got his support.

"I think we are in for a few surprises," he said.

Tribune just how in the hell did you come up with your journalistic definition of “close?” Yesterday’s advanced voting exist polls placed the PLP with a solid 55% to the FNM 's 31% limbo level. Tribune ya ain't suppose to be adjusting your own internal polling which has the FNM at 62% with the PLP at 24% to reflect the General Elections outcome ya working your butts off in the faint hope of winning power back for your friends in the FNM regime. Who is to be believed? For my money I’m going put my trust on the real results taken from the natives voting yesterday. Best you stop sniffing on that funny mind-altering press ink. The FNM going down and there is nothing your ink can say that will change their fate.

Boy, boy, boy. .. when the stats are in the FNM's favour it is all lies but when it's in the PLP favour, it is then the gospel truth

You certainly do make the rounds on these boards.Exit polling has proven to be no more reliable than pre-election polling and, in some cases, has been even further off the mark.Noways..all these polls are manipulative and beyond the actual truth.

Look, this whole story is ridiculuos and the reporter should be fired. Out of 8000 potential voters, they spoke to less than 200- and the reporter actually thinks the results are worth a grain of salt? It is to laugh at, so that's what I'll do. Ha, ha.

I would love to see some accurate polling done in the Bahamas, but seriously? Does this reporter know ANYTHING at all about how to conduct an accurate poll? The sample sizes are WAY too small to have any statistical meaning. To say nothing of the fact that an advance poll is not a representative sample of the population. (In this case, it would represent some of the most highly motivated voters as well as a few specific professions). No control was put into place for age, gender as well as for who the voter supported in previous elections. Honestly, the Tribune should be ashamed for putting this out and suggesting it has any meaning at all.

Calling this an exit poll is close to if not exceeding the bounds of responsible journalism. C'Mon Tribune.

Just remember too that FNM's are quite a bit more classy and controlled than others so don't expect them all to tell you who they voted for. PLP's on the other hand, well ... they have to publish who they vote for so they can collect ...

And I overlooked the fact in the article that this poll was conducted for only 4 hours. WTF? A properly conducted exit poll is done from the polls open until they close. And Jerome Gomez all ova da radio talk show sayin da exit polls have predicted that he will win Killarney. I really think the Tribune needs to do a follow up story explaining that this exit poll is a complete farce. Unbelievable...unthinkable!

Hold off on that one Comrade Cc cause the Tribune must first take timeout to deal fairly with all the farces the been unashamedly pedaling for their friends in the wretched FNM regime. How come no FNM blogger ever question the Tribune's own internal polling which has the FNM lending the PLP with something like 75% of the votes to be cast? Talk about using your ink for fantasy writing.

No one questioned it because it was an online poll, which already suggests its 50 % level of accuracy. But when you are talking about a live poll with actual voters, it is very easy to be accurate if you want to be. Why did they stop after 4 hours, and din't continue throughout the day? Why didn't they use a larger sample? With 7000 to 8000 voters, surely their sample size could have been greater than 200. It was done inaccurately, because that's how they wanted it to be done. Bottom line. As for all of the online polls and text polls the FNM has already won- they may be 50% right, and 50% wrong.