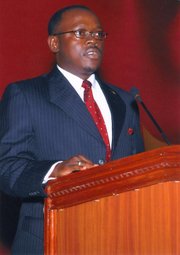 I Chester Cooper, the BCCEC's chairman, effectively told this newspaper that the Bahamas - and its economy - could not afford the 'opportunity cost' of passing up the financial benefits if commercial quantities of oil were found within this country's territorial boundaries.

Projecting that revenues worth a conservative $1 billion per year could be generated if the Bahamas Petroleum Company (BPC) and its joint venture partners were to discover oil deposits that could be extracted, Mr Cooper said the sector had the potential to "transform the economy" - both directly and through spin-off commercial activities.

Calling for a "non-partisan" debate on oil exploration in the Bahamas, the BCCEC chairman acknowledged that a comprehensive environmental, health and safety regime was required to protect this nation's environment and tourism industry.

Urging the Government to "get on with it" when it came to developing such a regulatory regime, Mr Cooper pointed out that the energy and tourism industries already co-existed in the Caribbean, in the shape of Trinidad & Tobago and Barbados. Cuba, also a tourism-dependent destination, has begun to drill in waters near its territorial boundaries with the Bahamas.

Emphasising that the BCCEC's support depended on the necessary safeguards being in place, Mr Cooper suggested it was time to lift the debate on oil exploration, and BPC's activities, to a higher level and away from being a 'political football'.

"Now that the political season is over, it is a good time to have a comprehensive, non-partisan debate on the issue," he said.

"We support the continued exploration of oil and, if successful, the eventual development of a safe and well-regulated industry. We urge the Government to quickly put the proper regulations in place for the orderly development of this industry."

Oil exploration was first seized on by the Democratic National Alliance (DNA) as an issue that it could exploit for political mileage in the general election run-up. Then former Prime Minister Hubert Ingraham attempted to use it, and BPC, to portray the Progressive Liberal Party (PLP) as 'conflicted' and unlikely to act in the nation's best interest, given that Davis & Co (now Deputy Prime Minister Philip Davis's law firm) and former PLP attorney general, Sean McWeeney, were named as the company's legal advisers.

There were then suggestions that Prime Minister Perry Christie had acted as consultant to BPC while in Opposition. Eventually, the PLP pledged to hold a referendum on whether oil drilling and exploration should be permitted in Bahamian waters, while Mr Ingraham backtracked from an earlier position that the FNM would not permit the industry if re-elected.

Ultimately, the former Ingraham administration returned to its already-stated position that oil drilling would not be permitted, and no new licences issued, until an appropriate regulatory regime has been implemented. Government officials have already visited the likes of Norway and the UK to examine those countries' regimes, and what the Bahamas can learn from and bring here.

Nevertheless, just prior to the general election, the Government decided not to renew the five BPC licences that expired on April 26, 2012, and returned the company's $300,000 fee payments to it. This leaves the ball very much in the newly-elected Christie administration's court.

BCCEC chairman Mr Cooper, meanwhile, indicated that the tremendous economic benefits - if oil was discovered in sufficient quantities in Bahamian waters - meant this nation, with its limited natural resources, narrow economic base and troubled government finances, could not afford to spurn this opportunity.

"The likely revenues can eliminate the National Debt in five years and contribute significantly to education, healthcare and development of infrastructure across the country and, importantly, an expansion in GDP leading to more favourable economic metrics," Mr Cooper said.

Hr added that the revenue generated from oil exploration could be used to reduce import tariffs on oil imports, reducing energy and gasoline costs. This, in turn, would lower the cost of living and doing business in the Bahamas, and make this nation much more competitive in attracting foreign direct investment (FDI).

"We cannot afford to be dismissive of these realities," Mr Cooper said, acknowledging that a proper regulatory regime - and its enforcement - were "a must" to preserve the environment and tourism industry.

Noting the example set by other Caribbean nations, he added: "It doesn't have to be one or the other - both can co-exist. It is being done in the region, in Barbados and Trinidad & Tobago.

"Clearly, the risks can be managed. We further understand that the Cubans are drilling right across the Bahamas' border. So we need not re-invent the wheel with respect to the regulations. We can draw on our friends in the international community with tried and tested regulations, like the US, UK, Trinidad and the Clean Caribbean Initiative."

Calling on the Government to "get on with it" when it came to developing a regulatory regime, because the opportunity cost of not doing so was too great, Mr Cooper said the Bahamas had to ensure its people were either trained abroad - or qualified Bahamians enticed back home - to participate in the oil exploration sector.

The BCCEC's energy and environment committee, he added, felt there was too much misinformation circulating on oil exploration, and called on the Government and BPC to better educate the public. The BCCEC is also planning to start discussions by hosting a luncheon on the topic shortly.

a non partision debate ,,lol ,,you sir are already defending the company that our PM was a consultent for ,just like you tried to defend the mortgate bail out .....a fair referendom on oil drilling is needed ..oh it will probably pass because the powers that be will fill all our little numbers players heads w/ dreams of riches ,just like they did with free mortgages....

Comrades drilling for oil is not a political decision to be made. It must remain the native's sole right to accept or outright reject oil exploration or drilling in our Bahamaland's waters. It is incumbent on every one of us pay that we pay extra close attention too all what will be said so that we understand the facts before making a decision. There are many potential risks and we should know them well. Many will come before you to convenience you of all the great potentially great monetary potential benefits to be reaped. Some will smell and look like the slippery snake oil salesman they are, while others will look act like professionals and business folks who want you to believe that they must know what they're talking about. Some appearing you will talk-up how all the benefits outweigh the risks. You have to know when they don't. The professionals, along with the possibbley bought for cash politicians will fight hard and convincingly for the oil corporations that the benefits of oil drilling outweigh the risks. What they can't ever tell you is that there is no risk, only that they will promise the natives to be able to 'respond" to the risks, not eliminate them. with the most modern technology money can buy. No amount of money can buy an absolute "no risk" insurance policy to back up their claims and promises.

true true ,true ..my perdicition if theres is a referendom it will pass because visions of oil wealth will dance in the peoples head, not the risk to our beautiful country

First, BPC does not have a track record for drilling oil. It has never drilled for oil. BPC emerged out of a mineral mining company in the Falkland Islands. According to its Website, BPC intends to hire/contract with other companies that are in this business oil drilling in deep waters.
Second, our legislations are not up to international standards.
Third, the company has no national development plan. Oil drilling is not an immediate event. In the meantime, we have to decide how we will proceed with specific economic zones -- tourism, agriculture, fishing, industry etc. Fourth, The Prime Minister of The Bahamas, The Honourable Perry Gladstone Christies has not addressed the issue of alleged conflict (This is far reaching implications.) "Oil exploration was first seized on by the Democratic National Alliance (DNA) as an issue that it could exploit for political mileage in the general election run-up. Then former Prime Minister Hubert Ingraham attempted to use it, and BPC, to portray the Progressive Liberal Party (PLP) as 'conflicted' and unlikely to act in the nation's best interest, given that Davis & Co (now Deputy Prime Minister Philip Davis's law firm) and former PLP attorney general, Sean McWeeney, were named as the company's legal advisers" As of today, Then leader of the opposition, (former) consultant now PM and Minister of Finance Then deputy leader of the opposition, (former??) legal advisor to BPC now Deputy PM and Minister of Works BPC legal advisor (former??) Sean McWeeney, now Christie Government Advisor BPC legal advisor (former??), Jerome Gomez, now Senator Mr. Cooper, stop looking at the icing and analyze the quality of the cake; check out the pan it was baked in and the temperature of the oven.....
We want what is best for The Bahamas and future generations.

BPC is not intended to drill for oil .it is simply set up to be a veichle between the oil drilling company and our treasury , in the venacular of vegas ,BPC is where the scimm happens ,of the peoples resources

very good comment ....,from mr Coopers comments to the press ,first about the mortgage plan and now oil drilling ,i don,t think he is capable of analyzing the quality of the cake . he appears to be using his position at the chamber of commerce as a political soapbox ..thinly veiled but a soapbox none the less..

Drilling in Cuba began a few months ago. Repsol, the Spanish oil company, announced that the first attempt to find oil in Cuban waters has failed. (BBC news 5/18/2012). If you want to know where the money is "The Scarabeo 9 [the oil rig] was brought all the way from China. Repsol is "leasing the rig for US$500,000 per day". Of course, the preliminary studies suggest that our neighbour has 5 billion to 20 billion barrels of oil.

The Progressive Liberal Party refers to the former BTC as its "cash cow". During the election there was a call to re-negotiate the CW deal. In addition, there was a lot of talk about Bahamians owning the resources. Will the PLP government (stop and review) want to nationalize BPC (ask for 51%)?

Mr. Cooper, Trinidad and Tobago (TT) has land oil rigs. TT is still searching for commercial quantities of oil in deep water (1,000 meters). Source : TT Minister of Energy and Energy Affairs, Kevin Ramnarine (5/18/2012).
Apparently oil is being found throughout the Caribbean, from French Guiana in the south to The Bahamas in the north?? How will this abundance affect the price of oil?