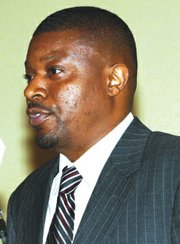 WHILE acknowledging that the $93 million cost overruns on the New Providence Road Improvement Project would likely push this year's fiscal deficit over $400 million, a senior minister in the former FNM administration yesterday said the Christie government was seeking to backtrack on its "wild promises to deliver the moon".

Responding to the newly-elected Progressive Liberal Party (PLP) government's claims that the fiscal deficit for the 2011-2012 Budget year would be closer to $500 million, rather than the projected $314 million, Zhivargo Laing said the Bahamas' fiscal circumstances should not have come as a shock to it.

The former minister of state for finance told Tribune Business that, given Parliament had to approve all the former Ingraham administration's borrowing when the PLP was in Opposition, and that the issue had figured prominently in its general election campaign, the new government could not feign ignorance when it came to the public finances.

He suggested that the new government was using the issue, and the alleged $500 million fiscal deficit, to pave the way to backtrack on its many campaign promises and blame the former Ingraham administration for leaving the Public Treasury bare.

"It depends on what they are defining as the deficit," Mr Laing, a newly-appointed FNM Senator, told Tribune Business yesterday when contacted on the issue. "If you start with the proposition that we projected a deficit of almost $300 million in the 2011-2012 Budget, and indicated that the overruns on the road project would be $93 million, that's almost $400 million."

The former minister also questioned whether the new government was including in its fiscal deficit calculations the estimated $15-$20 million in public works contracts that the former Ingraham administration signed in the days leading up to the general election.

If they were, Mr Laing said they were failing to "account" for the fact that the revenue cash flows to pay for these contracts were intended to be spread into the 2o12-2012 Budget year, and possibly the fiscal year after.

"Someone could project anything they want," Mr Laing said, adding that the fiscal projections provided by the former government, together with the PLP's focus on the growth in the national debt and government spending during its election campaign, meant it could not claim ignorance on the issue.

"They totally disregarded the economic circumstances in which the country found itself, so what is now the problem?" Mr Laing asked. "I would say that very rationale people might see that, having promised wildly to deliver the moon, and not having paid sufficiently regard to the cost of delivering it, the party governing has to find a way to back out. The best way out is to blame it on this so-called wild spending they claim we did."

And Mr Laing said he found it "curious" that Mr Christie, as Prime Minister and Minister of Finance, was unable to confirm the likely 2011-2012 Budget deficit, yet both his Deputy Prime Minister and Party Chairman had pronounced upon the $500 million figure as being accurate.

"This is one government, and the Minister of Finance cannot confirm what the deficit is, but he has a chairman and Deputy Prime Minister saying what it is and what they need to borrow. That, to me, is fanciful," Mr Laing told Tribune Business.

He added that the Government's spending in any fiscal year was outlined in the annual Budget, while all borrowings had to be approved by Parliament - ensuring the then-Opposition were always aware of the Bahamas' fiscal position. Parliament also approved the Budget, and the Minister of Finance's ability to go "above and beyond" what Parliament had approved was defined in law.

"This trickery in trying to make the public understand why they cannot deliver on their promises made to voters, because they are too costly, is not where the Bahamas should be in the 21st century. We should be some place else," Mr Laing said.