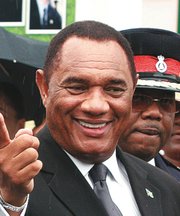 THE Government yesterday promised to hold a referendum on a national lottery and the decriminalisation or regulation of "numbers" houses.

In the Speech from the Throne, Prime Minister Perry Christie said the people will decide the fate of gambling the Bahamas.

"In accordance with its Charter for Governance, my government will also hold a referendum for the Bahamian people to decide whether a national lottery should be instituted and/or whether webshop-type gaming should be decriminalised but nonetheless regulated in accordance with internationally accepted best practices and in a way that would ensure revenue generation for the country."

This is not the first time a referendum on gambling was promised. In 2010 former Prime Minister Hubert Ingraham said his government was considering legalizing and regulating the local number houses in the Bahamas.

However, after consultation "with a wide range of community leaders and other citizens, including leaders of the church, the government has decided not to proceed with the legalization of the numbers business."

Mr Ingraham said his government decided against holding a referendum before the general election as it did not want to "mix up the two."

As it stands gambling is illegal in all forms for Bahamians and non-citizen residents of the Bahamas.

It has been estimated that a national lottery could pump more than $190 million into the Bahamas' economy annually.

Currently there are at least 16 independent numbers houses in New Providence alone, with another six in Grand Bahama and a few spread throughout the Family Islands.

Number houses employ up to 3,000 Bahamians directly with an annual payroll of more the $6 million per annum. Dicrius Ramsey, general Manager of Island Luck, told The Tribune in a previous interview.

Making his case for legalizing local gambling or playing numbers, Mr Ramsey said numbers houses also indirectly employ 2,000 Bahamians and have injected as much as $100,000 per month into community organizations.

The Bahamas Christian Council (BCC) has gone on record opposing the legalization of gambling in any form in the Bahamas.

Earlier this month, after the PLP announced they will provide details for a referendum on gambling within their first 100 days in office, President of the BCC Rev Dr Ranford Patterson said they are still opposed to the idea. He believes that more people are opposed to gambling than for it.

The BCC believes that a "country addicted to gambling and all the social ills tied to it condemns its people and generations to come to a society void of creativity and productivity."

The BCC said they think the government should come up with alternative solutions to produce and create wealth in our country.

Something strange - if not crazy - is going on in the Bahamas.

The established Government is considering holding a referendum to, in effect, decide whether or not it should execute established law!

In actuality, it is questioning the very reason for its existence: to protect law abiding citizens by prosecuting law-breaking citizens "to the extent of the law."

Here is the point: Gambling is illegal in the Bahamas for Bahamian Citizens. There is no question re. This established fact.

*Those who profess to be "Bible believing" Christians should become "Bible practicing" Christians by obeying the law and not gamble in any form or fashion, lest they disobey God's clear directive to "obey the laws of the land." If they do, perhaps their "Christian action" in this respect would cause the "numbers racket" to collapse!*

All who understand the "nature" of gambling recognize that it is THE most intellectually illogical behaviour in which a persons can willingly engage or "invest" one's funds. Only those who don't think carefully or logically because blinded by greed or lust for money or who don't "have faith in God," gamble.

The New Yorker magazine stated that the chances of winning the lottery in that state was 12 million to 1! In Florida, the ratio is 14 million to 1.

Dr. Norman Geisler puts it well in his book, Gambling: A Bad Bet, when he says: “Those who trust God don’t gamble, and those who gamble do not trust God to provide for them. So, as stark as it seems, we must choose between God and gambling.” [p. 119]

A. Gambling is an economically immoral: Petersen, in his book, “What You Should Know About Gambling”, quotes The Los Angeles Times as stating that a government sponsored lottery for the cause of education in that city is immoral: “It [state-sponsored lottery] is immoral because it would make education and other pressing needs of the state dependent on the weakness rather than the strength of our people.” [p. 73] Studies in the US have conclusively shown that “state lotteries ... take a disproportionately high amount of their revenue from the poor and minority communities.” This has led one author to state: “This is state-sponsored stealing from the poor and is a form of economic immorality.” [Gambling: A Bad Bet, p. 113].

B. Gambling is Socially Degenerating: It thrives on the baser instincts of citizens, encourages other vices and discourages the work ethic. The active promotion and encouragement of government in giving its citizens the hope that they could win millions of dollars and become a millionaire overnight cultivate and nourish a selfish, greedy love for money. Government backed and promoted gambling also depreciates and discourages a healthy attitude toward the work ethic, because gambling most definitely promotes the kind of attitude, mentality and way of life which are exactly opposite to the spiritual, moral and biblical injunction to work to meet one’s needs. “.. if through legal gambling, citizens are allowed or encouraged to make a profit or gain through chance rather than through work, the government may be undermining a basic social tenet of our culture.” [“Gambling in America,” p. 1]

C. Gambling is Politically Irresponsible:* It promotes a lifestyle that is contrary to, rather than being in conformity with, the kind of lifestyle that promotes national righteousness. The Bible is clear: “Sin is a reproach to a nation, but righteousness exalts any people.” [Prov. 14:34]. A government that backs and promotes legalized gambling teaches it people to support good and worthy causes for the wrong reasons - not out of patriotic concern, citizen responsibility, pride and decency, but out of selfishness, greed and personal gain. {Contd. in following post]

Just about every objective study have concluded this to be a fact, to claim otherwise is to promote a myth and claim what is patently untrue.

The bottom-line returns of legalized gambling to Government never covers the actual overall negative impact it has upon a society. “The actual cost to society in terms of crime, addiction, immoralities, is probably more than what the government takes in from its cut in gambling license. There is little return on the dollar for government licensed and supported gambling.”

“Some studies have concluded that the actual return on the dollar for such States as California and Florida is only two or 3 cents when all the expenses of managing the operation and negative fallout from gambling are taken into consideration.”

Historian John Ezel concludes his book on gambling in the United States, Fortune’s Merry Wheel, with these words: “If history teaches us anything, a study of over 1300 legal lotteries held in the United States proves [that]... they cost more than they brought in of their total impact on society is reckoned.”[cited by W. J. Petersen in What You Should Know About Gambling, p. 37].

E. Gambling is Domestically Detrimental: Another proven, undisputitubable fact is that It causes hardship, marital conflicts and deprivation of basic family necessities. “Absentee spouses, financial disasters, spouse abuse and divorce are only a few of the many tolls gambling takes on a marriage.” [Geisler, p. 125].

F. Gambling is Psychologically Addictive: Many people become the victims of irrational, unconscious desires that chains them to a way of life that is no longer voluntary, but compulsive and pathological. The American Psychiatric Association originally defined pathological gambling as a diagnosable mental disorder in 1980. It was described as: “a chronic and progressive failure to resist the impulse to gamble.” [Volberg and Steadman, “Refining Prevalence Estimates”, p. 502. Cited by Geisler, p. 91]

Should a Christian support the decriminalization of gambling ? The answer from both a practical, logical and biblical perspective is clear: Christians should say NO, to such a proposal - and of course, if you are a Christian and you do not gamble now, don’t begin; and if you do gamble, STOP!

Selah! THINK - and act - on these things!

While you guys are throwing so much bibical reasons against gambling, please hurl a few to all the guys and lesbians roaming our streets so free. Or is it that the bible is not so clear on that.

Remember the 2002 referendum when PC said vote NO