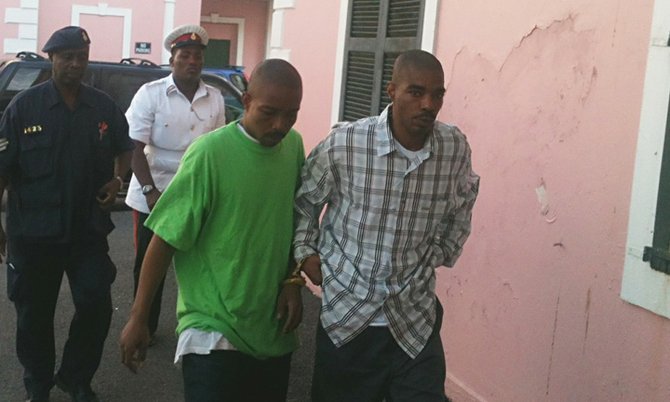 A SUPREME Court jury convicted a man of double murder yesterday while acquiting his co-accused who faced a single charge of murder during the month-long murder retrial.

Woodside, who was also charged with Russell’s death, was unanimously acquitted by the jury.

Armbrister and Woodside were claimed to have shot and killed Russell at the Fantasy Lounge in Palmdale.

Armbrister faces a second charge of murder. It is claimed he also fatally shot Sherwin Miller Jr in the head shortly after Russell’s murder.

The matter came before the courts for a third time because Justice Roy Jones had declared a mistrial in June 2011.

The mistrial came as a result of police not complying with a court order to remove prejudicial statements from videotaped interviews of the defendants – statements that were heard by the jury when the video was played in court.

Evidence in this third trial reveals that a man wearing a gray hoodie put a semi-automatic weapon (TEC-9) to the chest of a security guard at the entrance to the club. The guard was ordered upstairs with the gun pressed to his back. The gunman and security guard were joined by another man as they made their way to the second gate entrance. When Russell appeared, the hooded man holding the gun shot Russell.

Miller appeared on the scene a short time later and was shot twice in the head.

In yesterday’s proceedings, the judge summarized the evidence given throughout the trial before dismissing the jury sometime after noon to deliberate on verdicts with respect to the defendants.

The jurors returned to court 3.30pm with a question for the court instead of a decision to conclude the trial. The jurors wanted to know if one of the defendants could be considered on a lesser charge other than murder.

However, the judge instructed the jurors that only a conviction of murder or full acquittal would be considered in the case based on the evidence.

The jury were excused 10 minutes later and returned to court at 3.50pm with their verdicts.

Armbrister was unanimously convicted of double murder while Woodside was acquitted of the single charge of murder.

After dismissing the jurors, Justice Jones addressed Woodside and reiterated the verdict of the jury.

He told him that he was discharged and free to go if there was no other matter for him before the courts.

Regarding Armbrister, the judge told the man that he would return to court on February 1, 2013 where he would be sentenced for the two murders.

During his remand, he will be seen by a probation officer and psychiatrist who will prepare reports on his conduct and mental state. The reports are expected to be presented to the court for consideration before his sentencing.