Punishment Could Be 25 Years In Jail 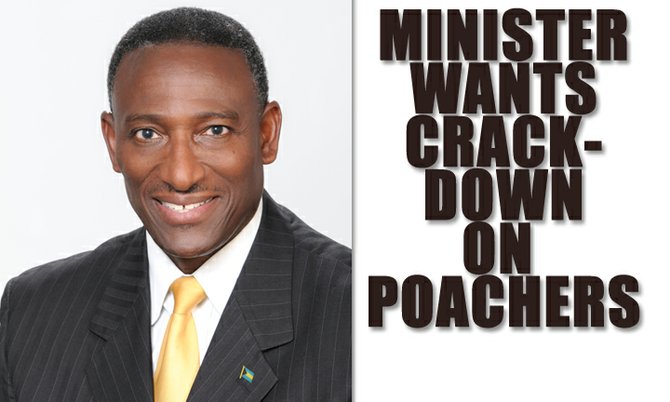 If cabinet approves, Mr Gray said those found guilty of illegally fishing could face a minimum fine of $250,000 and up to 25 years in prison. As it stands, the law books only sanction a maximum sentence of five years coupled with the confiscation of fishing tools and vessels. Any seafood found would also be taken into custody and given to local charities.

Mr Gray’s desire to have such convicts dealt with by the stiff arm of the law is the result, among other things, of the discussions between the government and Dominican Republic officials.

Bahamian officials, held talks in Santo Domingo a week ago to address concerns by Bahamian fishermen of Dominican poachers in our waters.

“I can assure you,” he said, “that the Ministry will in short order be asking the Attorney General’s office to amend certain sections of the Fisheries Act to give effect to greater penalties. I can tell you that I am foreshadowing that the penalties will be up to 25 years if I can get the Cabinet’s approval for those convicted of poaching in the Bahamas. The fines would, in my view, if I can get the Cabinet to agree, start at $250,000 rather than the minimum penalty which presently exists.”

The Minister also hoped that an agreement could be reached between both countries that would allow active seafood exporting from the Bahamas.

While the Christie administration has vowed to make major investments in new Defence Force technology to combat poaching, Foreign Affairs Minister Fred Mitchell said that the Dominican government has also agreed to help in this initiative.

Mr Mitchell said: “The government of the Dominican Republic from its highest levels, that is, from the lips of President Danilo Medina himself pledged that this problem would be addressed.

“He gave specific instructions to the naval forces in the Dominican Republic to begin a series of measures which the navy has predicted will result in a drastic decline in poaching in Bahamian waters.”

The Dominican government has also agreed to outfit licensed fishing vessels with trackers that will monitor and ensure that there are no unauthorised cross overs to Bahamian waters.

Mr Mitchell said two follow-up meetings have been scheduled that will send another Bahamas delegation back to the Dominican Republic to follow up on draft proposals for a technical cooperation agreement.

The Defence Forces of both countries will also hold discussions in the coming weeks.

If someone will take the risk to illegally fish in our water even though they risk getting their boat and equipment take from them along with five years in prison, I don't think 25 years and $250,000 will deter them because for one they wouldn't have the money anyway so the boat means more to them than the money. The solution is to beef up security in our waters as well as work with the D.R government on how to help replenish their waters as well as encouraging them to only allow a certain amount of boat license in order to help with overfishing in their country.

Isn't this the same guy who claims that conch are not overfished, despite mountains of research and evidence to the contrary?

If you guys were this serious about guns, we would put a dent in the crime situation.....

who,s going catch um ,when our land loving defence force comes down to exuma not more than a mile from shore in the cays, going from marina to marina ,,,while the poachers and hatians are 15 miles out on the bank ,,,i bet ya there hasn,t been a RBDF boat sleep out on the bank at anchor since the 80,s when they were hoping to grab a lost load ,,,,

Comrades stay tuned cause PM Christie is about make a cabinet shuffle?