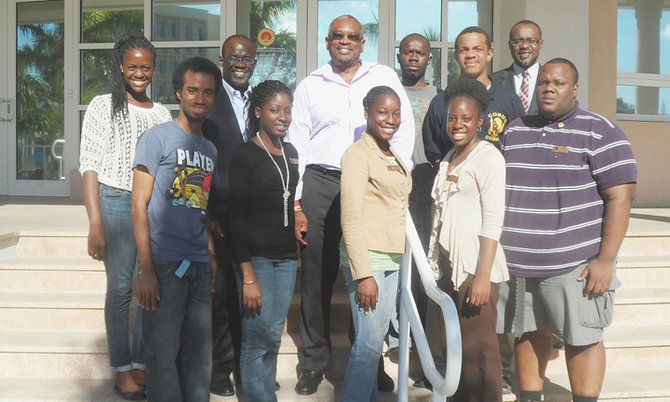 OPPOSITION leader Dr Hubert Minnis held a “spirited in-depth” discussion with members of the College of the Bahamas Union of Students.

Dr Minnis was accompanied by officers and members of the Free National Movement (FNM) including Darron Cash, national chairman; a past COBUS president, John Bostwick; and COB alumnus Michael Pintard.

During the discussion, held at the Student Union building at COB, the students shared their views on a wide range of topics impacting Bahamian society, including the state of the Bahamian economy, the role of tertiary education, and the role of COBUS in national development.

Dr Minnis pointed out that the FNM is known for accountability and transparency.

He said: “We are the people’s party and we seek to invite young people such as yourselves, and Bahamians throughout the archipelago, to engage in the discussion and to give us feed-back that will become inclusive as our party moves forward.”

Earnesto G Williams, president of COBUS, expressed concern about the student union’s lack of autonomy and the challenges facing the organisation in securing funding to meet the needs of students.

Noting that students are the future of the country, Mr Bostwick encouraged them to become their own advocates and raise issues that impact them, rather than wait for someone else to do so.

This kind of discussion can http://www.bopngrill.com/obtaining-a-...">increase your competency in many ways. You can find exactly what you want for the future, and that's a very important step in your career.