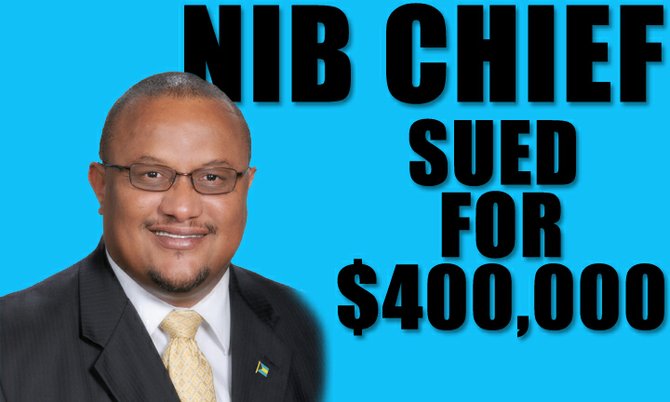 The National Insurance Board’s (NIB) chairman is being sued for almost $400,000 by two partners and a lender over payments related to a Freeport commercial development in which he is a shareholder, court documents have revealed.

A generally endorsed writ filed against Gregory Moss, an attorney and PLP MP for Marco City, alleges that he has failed to repay Ronald Sweeting and Delisa Duncanson, his fellow shareholders in The Siboney Commercial Centre, $91,781 each.

The duo, who are represented by Graham, Thompson & Co, are claiming that they both advanced the funds - totalling more than $183,000 - on Mr Moss’s behalf to cover his share of the mortgage payments owed to FirstCaribbean International Bank (Bahamas) by Adventurer’s Way Holdings.

The latter entity is the holding company that owns The Siboney Commercial Centre, and Tribune Business understands that more legal documents are set to be filed in the case by both parties imminently.

The writ also alleges that Mr Moss has failed to repay $200,000 to a third party, A. R. K. Investments, which was advanced on his behalf - and request - to an entity called Keystone Development Company Group Ltd. The latter company, Tribune Business understands, is the contractor that built The Siboney Commercial Centre, with the $200,000 payment allegedly related to sums owed for construction services.

The legal documents detail that Messrs Sweeting and Duncanson are suing for repayment of their respective $91,781, which they advanced “on behalf” of Mr Moss to FirstCaribbean International Bank (Bahamas).

They both described the sums as Mr Moss’s “portion of the shareholders’ contribution required to satisfy the monthly mortgage payments owed by Adventurers way Holdings, doing business as The Siboney Commercial Centre, over the period August 2010 to date”.

It was alleged that the payments were made on Mr Moss’s behalf subject to an oral agreement with the other shareholders.

In the case of A. R. K. Investments, it alleged that it again advanced the $200,000 on behalf of Mr Moss, and at his request, to Keystone Development Company Group.

This was “in partial discharge” of Mr Moss’s obligation under a March 2010 promissory note, which was executed by himself and Mr Sweeting in favour of Keystone Development Company Group.

Despite repeated attempts to contact him on this and other matters yesterday, Mr Moss was said to be in meetings and did not return The Tribune’s request for comment.

HE THAT COMES TO EQUITY MUST COME WITH CLEAN HANDS! KARMA AT WORK!!!!

I understand that a Freeport fisherman is owed money from Moss in a settlement from Focal Oil on some outboard engine problems related to the E Fuel when the fuel first came over. The fisherman got a loss of bussness settlement as well and Moss saysthey have to wait to get paid.

This guy stinks and needs to be convicted and a bi election (at his cost) needs to be held so that the number men can give out money again to regain the PLP seat!

I bet morewill come out against this no good - you know what!

Do we really believe that anything will come of this? He 'een kill no body and them people suing him don't need that money!! That's the mentality!

Well now we all know why he wanted to get Cargill out of NIB so bad and fast. He wants to get his hands deeper in that cookie jar. From Cargill's writ and the other information that is now coming out serious questions must be raised not only about the integrity of the actions of the NIB board and Shane Gibson, but also about the due diligence that the PM did on these persons. I don't know Cargill, but I can say that in my view for the first time that I can remember NIB was being operated as a professional institution under Cargill. Believe in Bahamians- what a joke and we just in the first year.

Comrades Toot toot all aboard cause it sure as hell looks like they done be all climbing aboard the tax payers big fat gravy-train.

Why is it that only the conductors of the governing elites seems to be the only thing that changes from one administration to another? .  And, with this type of broken mentality do you really trust any politicians, red or gold shirts, to actually do what needs doing about the illegal numbers rackets and doing it out of respect and compassion for the poor, and the new group joining being poor Bahamians?

You would think the toot toot could pass the way of the poor Bahamians one day too ... but I wouldn't be holding ya breath waiting while they spend so lavishly from ya public treasury's vault?

There's a line from the Leonard Cohen song "Anthem" -- "There is a crack in everything; that's how the light gets in."

I think some in this PLP administrator can't wait to make they own cracks visible, when it comes to maintaining the "promised integrity" in PM Christie's 'second-chance" government?

dem is all crooks..they are the same set who cause small businesses to close down left right and center, taking them to court in the middle of a deep recession and road works, while they hand was so deep in da cookie jar til dey wrist even broke(ouch,Ouch!) Trying to send 80 y/o women to prison rather than working out payment plans with them, lettin foreingers walk (or fly ) away owing millions but persecuting (yea prosecutin too) Bahamians to the fullest..aint against paying national insurance.just think it should be a level playin field.. notw they getting they business fix ha ha..real talks..

Jacklash, Moss took the settlement without approval from the fisherman, took 90% of it, admitted he owed the fisherman and said he'll pay him back in a year. I also hear many escrow accounts were emptied. This idiot has killed his own career...

This is the first time I visited this blog. Really this is awesome work with the blog. It is very pleasure to get it as I got huge helps right here. http://health.reviewship.com/visual-i...">Visual Impact Muscle Building Free

I visited your blog first time here is so informative ideas, Insect bites and Hypnotherapy The risk of an allergic reaction to insect bites Hypnotherapy (wasps and bees) increases during the summer months.http://buzzon.khaleejtimes.com/author...">Find Out More