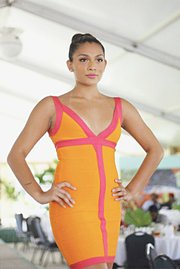 TAKING Beauties at Brunch to the island of Abaco, event organiser Patricia Chatti of Cia Monet Designs said the overall turnout of the recent event was the best series to date. Under the concept of celebrating women, Ms Chatti once again brought people together and fashion to life for the purpose of creating awareness about a cause.

The event was held under the patronage of one of the first female pilots and bankers in the Bahamas, Ms Astrid Stratton. Other women to be honoured included Wynsome Ferguson, Anna Albury and Quitel Charlton.

“Ms Ferguson was selected because of her consistent efforts in community building on the island of Abaco. Quitel graduated Valedictorian at seventeen years old and was president of Interact Club. She is class president, head girl, Anchor Club project manager, captain of an all-girls Basketball team and two time national Junior Achiever speech competition winner. And she was born totally blind.

Anna has beat most odds in life and all in the field of education. She has maintained honour roll status from grade one to six; placed second in the government’s Spelling Bee competition and finished second place in Rotary Club of Abaco Speech Competition 2009,” said Ms Chatti.

The event included dinner selections, a full fledged Cia Monet fashion show and an auction. Ms Chatti said everyone showed up “dolled up,” and ecstatic about the festivities.

Ms Chatti said the inspiration behind honouring the women in Beauties at Brunch events is to create more awareness of the Women’s Suffrage Movement. She wants the events to celebrate great Bahamian women for their achievements while they are alive.

She said the women honoured in Abaco, as well as Nassau and Grand Bahama were all humbled and asked “Why me?”

“They were all deserving and gracious to be honoured in such a way,” said Ms Chatti.

The final instalment of the Beauties @ Brunch series is set to take place on October 14 in Nassau. This event will honour the three first Bahamian female pilots of Bahamas Air. As well as Little Miss Petite Bahamas 2011, Syngular Journee and Brownies Caption 2011, Lauren Rolle.

“The highly anticipated grand finale for 2012 will be a night to be remembered. The entertainment for the night will boast true Bahamian pride. It is all about uplifting, encouraging and believing in yourself,” said Ms Chatti.

She said there will be a few surprises for both shoppers and persons simply interested in entertainment.

Some of the special guests of the evening include women from the Ranfurly Home for Children, Children’s Emergency Home and the Elizabeth and Girls Industrial School .