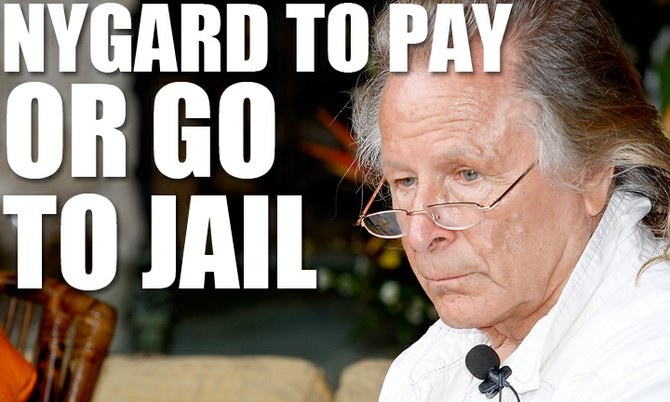 LYFORD Cay billionaire Peter Nygard was found guilty of contempt of court yesterday and ordered to pay a fine of $50,000 to the court or be jailed for 30 days for disobeying the court’s order pending the hearing of a civil matter involving himself and his billionaire neighbour, Louis Bacon.

Mr Bacon is the owner of Point House Corporation, the applicant in the contempt matter that stems from a legal battle between the two involving a property right of way.

Along with the $50,000, which Justice Stephen Isaacs yesterday said must be paid to the court within 14 days, Nygard must also pay, once he receives an invoice from Point House Corporation, for the expenses to restore the road to what it was in June before he disregarded the courts order.

Point House Corporation (PHC) sought to have Nygard committed to Her Majesty’s Prison for contempt of court. PHC claimed that Nygard ignored the terms of an order given him by the court at a hearing on June 13, 2012.

The basis for PHC’s contempt application was that Nygard did not do as promised, which was to immediately remove the words “To Nygard Cay” from the roadway, refrain from affixing any further signs of any kind on the roadway, and make no further alterations to the state of the roadway area pending the September 4 hearing and decision of the summons filed in the court by both Bacon and Nygard in June.

It was claimed that instead, Mr Nygard on June 18, through his workers, altered the roadway area by removing several coral stones and destroying certain plants along the roadway that PHC had owned for more than five years.

It was further claimed that the following day, June 19, Nygard through his servants, altered the roadway area by adding another layer of asphalt to the area in front of the entrance gate to Nygard Cay.

Then, on July 14, Nygard reportedly, through his servants, cut away, removed and destroyed the gates owned by PHC and installed posts located on its property.

Two weeks later, on July 31, Nygard, through his servants, reportedly caused several large stones to be placed on a section of the roadway that crosses over the land owned Mr Bacon.

All of these grounds, according to PHC’s application, were done in spite of the orders of the terms given to Mr Nygard in court on June 13.

Mr Nygard and Mr Bacon have been battling each other before the courts for the past six years, filing suits and counter suits.

Nygard’s lawyer Keod Smith, and Point House Corporation’s lawyer Robert Adams made submissions to the court on September 17 and 19 concerning the contempt issue.

In yesterday’s proceeding, both Lyford Cay billionaires were absent from court.

Brian Moree, QC, indicated to the court that he would be continuing with the matter in place of Mr Smith, as he had received instructions from Mr Nygard that he was prepared to undo work that was done to the right of way.

However, Justice Isaacs said that nothing would stop his ruling unless the plaintiffs indicated to the court that they were satisfied with it. Mr Adams then told the court that, notwithstanding his previous discussion with Mr Moree, the plaintiffs came to hear the court’s ruling.

Justice Isaacs read his 11-page ruling for the record. In paragraph 23 on page 10, he said that the steps taken by Mr Nygard after June 23, “cannot be characterised as a mistake in circumstances where he sought advice before hand.”

“He broke a solemn obligation to the Court. If left unchecked, Nygard’s conduct after June 13, 2012 would tend to erode the public confidence that the judiciary shall subject all parties appearing before it to the rule of law. It matters not that a party passionately believes in his case, self help justice of the nature seen in this case must be stopped as a matter of urgency by the regulatory coercive powers of the Court.”

He said that “having considered the arguments of both counsel, I find that none of the technical issues raised by Nygard can assist him and that he is guilty of contempt to the requisite standard.”

Justice Isaacs noted that giving the “prevailing circumstances”, restoring the road to the way it was on June 13 was imperative and exercised his discretion to direct Point House Corporation to restore the right of way, as far as practically possible.

“The restoration includes, for the avoidance of doubt, the replacement of Point House’s gates. The charges for labour and material that are properly invoiced are to be paid by Nygard within 14 days of his receipt of same.”

Justice Isaacs then ordered that Nygard be committed to Her Majesty’s Prison for 30 days. The imprisonment would not be enforced on the conditions that Nygard provides “proof that he has paid a fine of $50,000 to the Public Treasury within 14 days of today’s date and he liquidates the restoration expenses incurred by Point House within 14 days of the presentation of the bill, vouched by invoices, for same,” the judge said.

Should Nygard fail to comply with the court order, said the judge, “and thereby purge his contempt within the times specified, he shall stand committed to the said prison for a term of 30 days and a Warrant of Committal will be issued accordingly.”

Costs of the contempt application was awarded to Point House to be taxed, if an agreement between the two parties could not be reached.

Why is this news, you think a billionaire would find it hard to pay $50,00?

What's all this " his servants " being used in this report. Are they "servants" or employees...there is a big difference. If these in fact are servants, then the Government need to investigate. The last time I checked slavery was abolished.

I agree! "Servants' really sounds backwards. (Where's the editor to suggest a better choice of words?)

Servant is an older English term for "domestic worker" (though not all servants worked inside the home). Nothing to do with slavery... Only the reporter can answer why he/she chose to use the word 'servants' instead of 'staff members', 'employees' etc.

Slavery was an old english way of living in the Bahamas, so that word shouldn't be use in the country because it is demaining.