Update: Southeast Bahamas Could Be Spared Effects Of Sandy 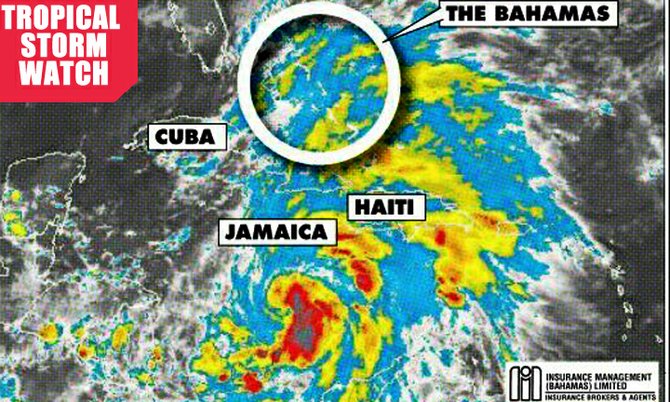 ALERT #7 ON TROPICAL STORM SANDY ISSUED BY THE BAHAMAS DEPARTMENT OF METEOROLOGY WEDNESDAY, OCTOBER 24, 2012 AT 6AM.

A tropical storm watch remains in effect for the Northwest Bahamas that includes Grand Bahama, Bimini, Abaco, the Berry Islands, Andros, Eleuthera and New Providence. A

a watch means that tropical storm conditions could affect the mentioned islands within 48 hours.

At 5a.m. the center of Tropical Storm Sandy was located near latitude 16.3 degrees north and longitude 77.0 degrees west or about 120 miles south of Kingston, Jamaica and about 363 miles south-southwest of Ragged Island.

Tropical Storm Sandy is moving toward the north near 14 miles per hour. This general motion is expected to continue through Thursday accompanied by a gradual increase in forward speed. On the forecast track the center of sandy will approach the Central Bahamas early Thursday morning.

Maximum sustained winds have increased to near 70 miles per hour with higher gusts. Additional strengthening is forecast during the next 48 hours and sandy is expected to become a hurricane by the time it reaches Jamaica and Cuba.

Tropical storm force winds extend outward up to 140 miles from the center. Tropical storm conditions are expected in the Central Bahamas by early Thursday and by mid afternoon in the Northwest Bahamas.

Residents in the warning and watch areas should brace themselves for strong gusty winds and flooding in low lying areas. All precautions should be taken to secure outdoor valuable properties.