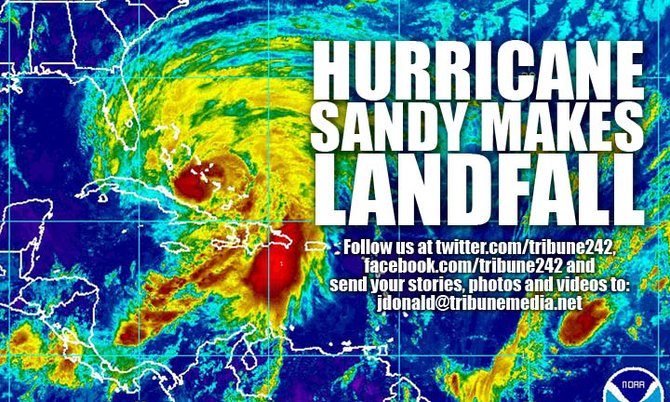 6.30pm: The weather is picking up out there as Hurricane Sandy moves north. Accuweather's latest forecast map gives and indicator of the storm's path.

ACKLINS: There are reports that power is out and most of the roads on that island are flooded. Government administrator Berkeley Williams said the biggest concern was supplies after a boat cancelled its trip there.

RAGGED ISLAND: A school has been flooded but otherwise no major damage.

GREAT INAGUA: There are reports that docks on the western side have been completely destroyed.

NEMA has released the following statement:

The centre of Sandy is near Arthur’s Town, Cat Island and its wind field is expanding

Hurricane warning means that hurricane conditions are expected somewhere within the warning area within 36 hours.

At 5p.m. the centre of Hurricane Sandy was located near latitude 24.5 degrees north and longitude 75.6 degrees west. This puts the center over Arthur’s Town, Cat Island, 60 miles southeast of Eleuthera and 125 miles east-southeast of Nassau.

Maximum sustained winds remain near 105 miles per hour with higher gusts. Sandy is a category two hurricane on the Saffir-Simpson Hurricane Wind Scale. Some weakening is forecast during the next 48 hours. However, Sandy is expected to remain a hurricane as it moves through The Bahamas.