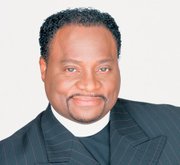 A LOCAL clergyman yesterday questioned the integrity of any religious body supporting the ministry of mega-church senior pastor Eddie Long who is hosting the Spirit and Truth Conference at the Atlantis Resort today.

Those accomplishments, however, were overshadowed when four young men in 2010 alleged that Long coerced them into sexual relationships with him. The claims later snowballed into Long temporarily stepping down from his duties at the church and a near divorce from his long-time wife Vanessa, according to several US based media outlets.

Speaking with The Tribune yesterday Cedric Moss, pastor of the Kingdom Life Church on Chesapeake Road, said by all indications Long should not be considered a pastor, considering his “checkered past.”

“Two things,” Mr Moss said, “should be considered. One, if he is coming here of his own accord and renting a hall. In that event, he can speak to whomever wants to listen. Now if Long is coming here and is being supported by a church, pastor or religion group that should be cause for concern.

“I don’t even believe Long is a pastor. He who is above reproach is the first qualification. That doesn’t mean perfect, but it means that persons should be credible.”

Mr Moss said because the matter has not been resolved or brought vindication to Long, he should not be considered a pastor.

The Conference, which ends tomorrow, will see a number of speakers, including Long and Bahamian Bishop Neil C Ellis, senior pastor, Mount Tabor Full Gospel Baptist Church. Both pastors, according to an endorsement which was written by Long of Ellis, are long time friends.

“Integrity,” said the endorsement, “is often a characteristic that, unfortunately is hard to find in the first word that comes to mind when I think about my friend, brother, confidant and accountability partner, Bishop Neil C. Ellis, he has proven to be a man of great integrity, strength and courage. I am often amazed at his ability to hear the voice of God and accurately communicate it with such passion.”

Several attempts to reach Bishop Ellis were made, but none of the calls was returned.

It's all about the money!

Money that they will take out of the pockets of the blinded by faith idiots that listen to this two face devils in disguise!

Boyy, you have to continue to read the bible for yourself!!

So the man had sissy sex with four men (that came forward so far), settled with them out of court - And I am supposed to go read my bible?

This what the Bahamas Christian Council should deal with Rev. Paterson. This is right your face. SPEAK

Since when has God been concerned with our "checkered past"? Just because he sins differently than you do, does not mean he doesn't have integrity.

For a just man falleth seven times, and riseth up again: but the wicked shall fall into mischief. Proverbs 24:16

Last time i checked my dictionary, just and righteous are both synonymous.

In that case would you let an individual with a "checkered past" of arm robbery work in your bank? The first person that came to mind after reading this story was Antonio Andretee Sands. He too had a checkered past that was ignored in 2006 which was regretted in 2009. Google it and see for yourself.

Beware of false prophets who come disguised as harmless sheep but are really vicious wolves. You can identify them by their fruit, that is, by the way they act. Can you pick grapes from thornbushes, or figs from thistles? A good tree produces good fruit, and a bad tree produces bad fruit. A good tree can’t produce bad fruit, and a bad tree can’t produce good fruit. So every tree that does not produce good fruit is chopped down and thrown into the fire. Yes, just as you can identify a tree by its fruit, so you can identify people by their actions.

1It is a trustworthy statement: if any man aspires to the office of overseer, it is a fine work he desires to do. 2An overseer, then, must be above reproach, the husband of one wife, temperate, prudent, respectable, hospitable, able to teach, 3not addicted to wine or pugnacious, but gentle, peaceable, free from the love of money. 4He must be one who manages his own household well, keeping his children under control with all dignity 5(but if a man does not know how to manage his own household, how will he take care of the church of God?), 6and not a new convert, so that he will not become conceited and fall into the condemnation incurred by the devil. 7And he must have a good reputation with those outside the church, so that he will not fall into reproach and the snare of the devil.

8Deacons likewise must be men of dignity, not double-tongued, or addicted to much wine or fond of sordid gain, 9but holding to the mystery of the faith with a clear conscience. 10These men must also first be tested; then let them serve as deacons if they are beyond reproach. 11Women must likewise be dignified, not malicious gossips, but temperate, faithful in all things. 12Deacons must be husbands of only one wife, and good managers of their children and their own households. 13For those who have served well as deacons obtain for themselves a high standing and great confidence in the faith that is in Christ Jesus.

WTF? Ms. Virgil! Did he meet with the Government - Did the religious tourism effort led by the Bishop endorse or support this effort and was there any courtesies extended by the Government of The Bahamas? i.e Greeted at the plane - bypassed scrutiny of security forces and treated as diplomats.....? We demand and deserve more from your efforts ....

lol who say anything about the government?

why is this so strange we got a goverment full of girly men and manly women ,oh i forgot only foriegn gay people are bad ,ours are annointed ,,lmao

will fly away fred , OHW ,and M Pratt be in attendance ,,,,,,lol,,,i don,t care what people do in their private life i just get so tired of the churches runnin there mouth bout soddom and no adam and steve ,when they seem to be the mecca for homosexuality and the choirs are the straight REVS ,haraams ,,lmao,,is anyone apart from the duped surprised that Long and Ellis are friends ,,,,,,,,,,,,,,,,,,

Don't understand why some people allow themselves to jaded by so called men of the cloth. It's a joke to me that when these men, like Long, are accused or found guilty of actions that goes against the teachings of the great book, their "followers" find ways to justify their wrong-doings.