‘No Way’ Ingraham Would Have Run $550m Deficit 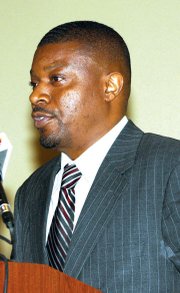 A former FNM Cabinet minister yesterday said there was “no way” an Ingraham administration would have run up the current government’s projected $550 million deficit, telling Tribune Business that “sobriety” was needed to restore the Bahamas to fiscal balance.

Suggesting that the Christie administration needed to give a “full and detailed” accounting of how the former government ran up a $504 million deficit during its final year in office, Zhivargo Laing told Tribune Business that recent Central Bank of the Bahamas’ figures were more in line with his administration’s previous estimates.

The Central Bank, in its monthly economic and financial developments for July 2012, noted that the fiscal deficit to end-May - the first 11 months of the 2011-2012 fiscal year - was around $294 million.

The Ingraham administration itself had projected a fiscal deficit for the full year of around $300 million, Mr Laing disclosed, suggesting that the current government had got to $504 million by charging expenses due to fall in the 2012-2013 fiscal year to 2011-2012.

Based on the Central Bank data, and the $504 million projection, it appears that a remarkable $200 million-plus deficit was incurred in June 2012 - the first full month after the Christie administration was elected to office.

Nevertheless, Mr Laing said partisan politics had to be set aside, as he called for a “genuine effort at fiscal reform” that would set the Government’s finances back on to a sustainable trajectory.

When asked by Tribune Business yesterday to explain the marked $200 million-plus discrepancy between the Central Bank figures and the projected 2011-2012 deficit, Mr Laing said of the $294 million: “To be honest with you, that is around the figure we would have been considering as well.”

Asked to explain the vast difference, the Senator added that it likely related to “charging off expenses that could fall due in the following fiscal year against the current fiscal year”.

“It is possible to manipulate the fiscal numbers to achieve a deficit above the $294 million the Central Bank said,” Mr Laing added.

“It’s a matter of accounting. One would have to ask the Government for a full and detailed accounting of the $500 million deficit they said was due in the 2011-2012 fiscal year.

“When we thought what would be the likely outcome, expenditure related to the road project aside, it was always our intention that expenditure would have fallen into the following fiscal year.”

Depending on the accounting treatment used, Mr Laing conceded it was always possible to ‘charge off’ the roughly $100 million in New Providence Road Improvement Project overruns against the 2011-2012 fiscal year, taking the fiscal deficit to around $400 million. And charging off other expenses due to fall in 2012-2013 could have boosted the 2011-2012 deficit.

“While that could have been done, our anticipation was that the deficit would always be in the region around $300 million,” Mr Laing told Tribune Business.

“Beyond the accounting and any of manipulation of expenditure, there’s always the reality that a Budget has flexibility in it. We could have made Budget advances for any number of things, but it is prudent to adjust downwards expenditure to take account of upgraded expenditure in other areas.

“There’s no doubt that we could have come to the Budget and make adjustments to avoid the kind of bloated deficit the PLP has been happy to tout as the deficit, then follow-up with a $550 million deficit of their own.

“There is no way an Ingraham administration in office would have produced a $550 million deficit, no possible way.”

Mr Laing said the Christie administration’s decision to run an increased fiscal deficit in 2012-2013 showed it “could not be serious” in trying to rein in a national debt of more than $4.5 billion.

Attacking the $15 million in “vague expenditure” allocated to the Prime Minister’s Office, and “most bloated Cabinet in our history”, the FNM Senator added: “You do not make the point that it is reckless to leave behind a $500 million deficit, and follow-up with a $550 million deficit. That cannot be a serious point.

But, adopting a more conciliatory line that removed politics from the equation, Mr Laing added: “The reality is there has to be a genuine effort at fiscal reform, and restoration of a reasonable fiscal trajectory in the medium and long-term in this country.

“That represents the kind of sobriety on the part of the Government of the Bahamas that is willing to be frank with the Bahamian people in terms of what the Government’s needs are in raising revenue, securing legal revenue, what citizens must pay, and the need to be more disciplined in reducing waste in the public sector and to be prudent and more effective in public expenditure.

“No amount of pandering and effort to gain popularity is going to change that,” Mr Laing said.

“These are the fundamental realities facing us, and they have to be approached with sobriety. The global economy is in trouble, as is the Bahamian economy. You have to be serious about how you move in those circumstances.”