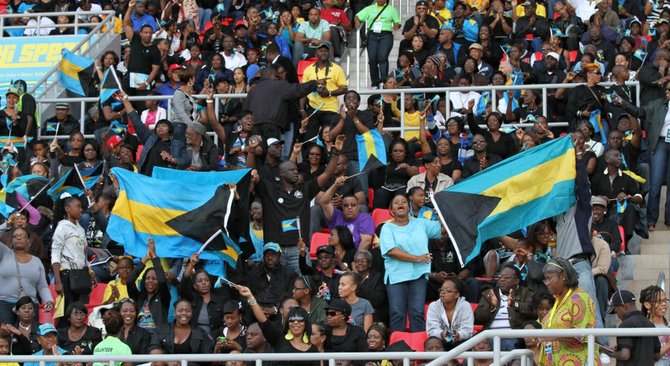 On day two of the Carifta Track and Field Championships, the Bahamas was able to add 10 medals to their total and bring their count to 21.

Laquan Nairn became the first member of Team Bahamas to win multiple individual medals at this year's games when he took gold in the U 20 Boys Long Jump with a leap of 7.40m.

After an inspiring run in the 1500m, Major came from behind to take gold with 4707 points and Sealy won bronze with 4611 points.

On the women's side, Miquel Roach took silver in the Pentahalon with 3318 points.

Relative newcomer to the hurdles, Mikhail Bethel took bronze in the U17 Boys 400mH in 58.06s.

Just minutes after the gold medal triumph in the U20 Girls 4x100m (44.77s), an exuberant Bahamian crowd experienced disappointment in the U20 Boys 4x100m when the team fumbled the second exchange and were disqualified.

Jamaica leads the medal table with 50 medals including 20 gold, 19 silver and 11 bronze.

This suppose to the celebration of the death and resurrection of our Lord. But this so called Christian nation want show off their new stadium. This is sacrilegious do you think Israel would hold such an event during Passover.

Bahamians could always find something to run on about. Carifta is held the same time every year.

How many bars, liquor stores, nightclubs, and number houses are closed for this reason?

I am amazed that people who called themselves Christians are so intolerant of others. Carifta is held the same time every year, and if a individual feel its sacrilegious then don't go. However, your issue should not hinder me from celebrating Cartifa. Furthermore, to the folks who feel it is sacrilegious to be celebrating Carifta, find me one Bible text where Jesus told us to celebrate Passover after the cross. The reason the veil was torn in the temple was because Jesus died. That is why he instituted Communion as Passover was no longer relevant with the death of Jesus, as Passover pointed towards his death. So for folks who want to say this is sacrilegious, check you history and you note, this so called "Easter/Passover" had nothing to do with Christianity, but paganism. Now that is sacrilegious. So I will enjoy my Carifta.

CARIFTA is usually held during the Easter/Passover holiday, so I don't understand your point...Why can' t we go to Church and CARIFTA? What is so amazing is that the so-called "Christians" are always trying to defend their faith and cause...I thought Christ did that already...And that is why we celebrate Holy Week, to acknowledge what Christ did and Resurrection Sunday to celebrate his victory...Case Closed, now go out and celebrate LIFE...Celebrate our nation and it's young citizens, who are representing the BAHAMAS...See you at CARIFTA...What Would Jesus Do? Where Would Jesus Be?

Relax. Easter is a celebration of the Resurrection of Jesus, giving us all eternal life. The Easter Bunny and Easter Egg hunt were pagan traditions celebrating Dawn and Spring, both symbols of life. It is the opinion of the Church, I'm Catholic, that humans are inherently worshipful of life. Since Jesus Christ is the Truth, the Way and the Life we wanted to worship him the whole time but didn't know of him, that's why we worshiped other symbols of life. This bears out since in many places, after the masses adopted Christianity they threw they're pagan gods away. Now as far as CARIFTA goes, why not go and cheer on #TeamBahamas. Celebrate the amazing human body and what it can do. God made all of this possible and it is through his power all of this is happening. If The Father didn't want CARIFTA it wouldn't happen since all things happen through him.

Personally I think the Tribune spent more time trying to besmerch and nail Stephen Newbold into the ground than they spent covering the Carifta as a national event. (One full week of 20 inch headlines) But the good thing is that Stephen shook off the negative press, he came out and he performed, true to form. Just hope he gets a gold tonite. And when you are at the stadium tonite look around. Did a certain segment of the Bahamian population boycott this event? (and Im not talking about church folk)

GEE JOHN WHAT SEGMENT OF THE POPULATION ARE YOU TALKING ABOUT ??? DON,T CLOAK IT MY MAN SHOUT LOUD AND PROUD WHAT YOUR ALL ABOUT !!!!!!!!!!!!

Why do we have to bring race into things. I am sure there are other segments of the population that are not there. Whether a person is at Carifta or not is there free choice. Could it be that that segment of the population is in Jamaica supporting our athletes at the swimming portion of Carifta? Someone had to go to support them. Let's stop thinking negative of people as at the end of the day we are all Bahamians, irrespective of which segment of society we come from.

john brings race or anti foriegn ,which is really anti white , comments into everything ,,after forty years of majority rule in his mind his identity as a person and lot in life is defined by what white people do or don,t do ..............sad

Looks to me like a lot of empty seats.

It is brilliant that we, a nation of a few hundred thousand people, can produce such brilliant performances in the arena of sports. Congratulations too to Jamaica. Keep up the good work. Just goes to demonstrate that focused determination can help us compete with the best and come through victorious.

It's a shame ZNS could not do better with the coverage. I mean no sound and very poor camera work. Also the grounds in the stadium looked awful. Did they sack the groundsman or what?

Despite everything it was a good event. Maybe this is what is lacking in this country, more wholesome, clean family orientated events. maybe its time t re-invent the Bahamas games, we have the stadium, the hotel rooms, the upgraded roads and more experience hosting sporting events