A GREY Bob Marley shirt was unwrapped from a sealed package that a police forensics examiner opened yesterday in Supreme Court. 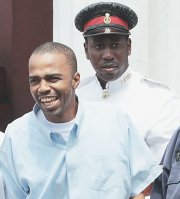 Immediately after the unwrapping, Geoffrey Farquharson, the attorney defending Kofhe Goodman against a murder charge concerning the death of Marco Archer, objected and suggested that the item was not the same one handed over to a police officer from Constable Denrea Johnson, based on the evidence.

Goodman, 37, of Yorkshire Drive, faces a murder charge which he denies. It is claimed that between September 23 and 28, 2011, he intentionally and unlawfully caused the death of Marco Archer, who disappeared from Brougham Street.

In yesterday’s proceedings, prior to Sgt Sheria King taking the witness stand, Constable Johnson continued her evidence from Wednesday, when the crime scene investigator had opened a sealed paper package that was supposed to contain a shirt collected from the scene.

However, when she did so, instead of a black Bob Marley shirt, a sealed package dropped out.

It was the same with the remaining packages in yesterday’s proceedings.

Crown prosecutor Darell Taylor, following this, asked for this witness to be stood down, to be later recalled, in order to call Sgt King to the witness said.

Mr Farquharson objected to King being called on the basis that the previous witness never indicated whose signature was on the packages found inside the initial packages.

Justice Bernard Turner told the attorney that his objection was “misconceived” in fact and “unsupported” in law.

He granted the request and prosecutor Braithwaite began questioning the examiner about October 21, 2009, after she was sworn in.

“Did you receive some items from officer Gray?” Mr Braithwaite asked.

“Yes, I did,” she answered, adding that the items she received were examined by her and sealed, and resealed in the initial package they came in.

“Did you place the seal on that item?” the prosecutor asked, referring to the first package. “Yes I did,” King answered.

When the package was unsealed and unwrapped, a grey Bob Marley shirt was displayed.

Mr Farquharson got to his feet and strongly objected to the item, arguing that the jury had seen a photo of a different item.

He also suggested that the item was not the same one handed over to a police officer by Constable Denrea Johnson based on the evidence.

The judge told the attorney that he would have an opportunity to cross-examine the witness.

Mr Braithwaite asked Sgt King about the state of the package she received for analysis.

“It was sealed,” the officer answered.

The policewoman, with permission from the court, broke her seal on the remaining packages that contained khaki pants, multi-coloured boxers, slippers and the plastic bag that the items were found in on the scene.

During cross-examination, Mr Farquharson asked the officer if she knew the size of each of the contents that were unsealed. She said she did not.

Directing her to look at photo number 35 in the picture album and ask her: “That’s a black shirt ma’am?”

“No. It’s grey” the officer answered.

“Did you ever give any of these items to ASP Bonaby?” the attorney asked.

“Did he ever get them from your custody?” Mr Farquharson then asked. The officer said “no”.

“You said you made some cuttings. What did you do with those cuttings?” the attorney asked.

“The cuttings were packages and sent off for DNA analysis,” King answered.

“Why would you have been sending further cuttings in March 2012?” Mr Faruqharson asked her.

She answered that it was not only for completion of her analysis case but “as an analyst, you have that discretion”.

A legal discussion took place for 20 minutes after Mr Farquharson attempted to, through his iPad, show the officer a photo of a package reportedly bearing her signature.

Upon return, Mr Farquharson showed her the photo on his iPad and she confirmed that it was her signature on the package that contained a t-shirt.

Following this, Goodman called over to his attorney to whisper something to him and Mr Farquharson then told the court that his client had mentioned that he was not feeling well before proceedings began today.

The attorney said he told Goodman to “soldier on” so that a whole trial day would not be wasted, but it now appeared that he would need some medical attention upon his return to the prison.

Justice Bernard Turner made an order for Goodman to be seen by a physician upon his return to Her Majesty’s Prison and asked the jury to return to court tomorrow at 11am.