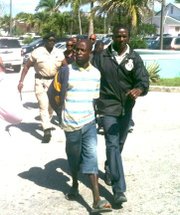 Kendal Hepburn outside of court.

KENDAL Hepburn, a 39-year-old of Mackey Street, admitted to being in possession of $750,000 worth of cocaine and marijuana seized by DEU officers earlier this week.

Hepburn received the mandatory minimum of four years at Her Majesty's Prison.

His co-accused 48-year-old Calvin Rolle of Pinewood Gardens and 27-year-old Tristan Black of Freeport, Grand Bahama, received a November trial date after pleading not guilty to the charges and were remanded to prison.

WHAT?? Granted, the guy plead guilty, but $750,000 worth of cocaine and marijuana and they see fit to give him the MINIMUM of 4 years? That's a SERIOUS amount of drugs and he gets the smallest time in jail...now THAT's a GREAT example to set...attention all Bahamians. For go honest employment and go into the drug trade, you could be transporting and peddling millions in drugs and man, the benefits far outweighs the penalties!! Hey honey...I buying myself one boat!!

WHAT'S WRONG WITH DC MAGISTRATE C. BETHEL??? GIVING THE MINIMUM 4 YRS.FOR SUCH A LARGE AMOUNT OF DRUGS. HE WILL BE DOING THE SAME THING ONCE HE GETS OUT. NO WONDER SO MANY TURN TO THIS WAY OF LIFE.

This old criminal got a light sentence because he didn't waste the court's time. Ridiculous!

What is going on with all these drugs?

He basically gets a year for each charge. Ridiculous! I would like to see us dig deeper and investigate who is supplying these drugs and where they are coming from! You take down one drug dealer and 2 more pop up in his place.

I think much of it may be about the possession of cocaine rather than marijuana. I think sentencing for trafficking a hard drug like coke should be much harsher. It's an addictive dangerous drug that destroys lives. I'm shocked to see we have a market for it here. The courts need to get tough on people pushing hard drugs.