Ferguson, Brown miss out on finals at Moscow Championships 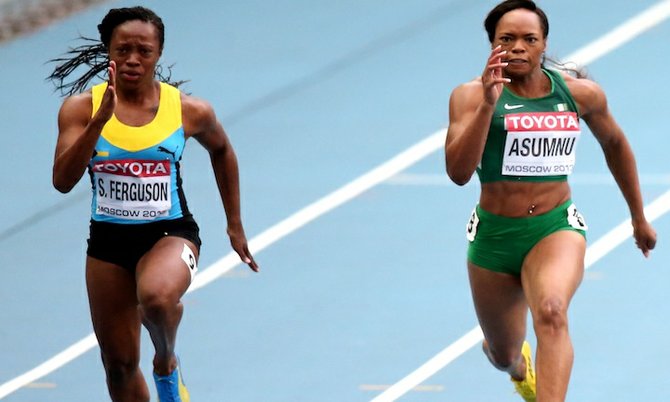 MOSCOW, Russia: Chris 'Fireman' Brown and Sheniqua 'Q' Ferguson found themselves in the same position, gave it their best, but unfortunately neither of them advanced to the final of their respective events at the 14th IAAF World Championships today.

On day three of the nine days of competition at the Luzhniki Grand Sports Complex, Ferguson got left in the blocks in the women's 100 metres , and by the time she powered her way through the straightaway, the race was over. She ended up sixth with 11.35.

It was a 1-2 sweep for the Jamaicans as Shelly-Ann Fraser-Pryce clocked 10.87 to hold Kerron Stewart, Ferguson's training partner, who trailed in 10.97 for the fastest and fourth qualifying times for the final later and pegged at number 16 on the performance chart.

Immediately after her exit, Brown had to run out of lane eight in the second of two three heats in the men's 400 metres, finishing third in a season's best of 45.18 seconds, but it wasn't enough to get him into the final.

The savvy veteran was placed 10th overall on the chart that saw all eight qualifiers dip under the 45-second barrier.

American LaShawn Merritt won the heat in 44.60 and one half of the Belgium twin brothers, Jonathan Borlee took second in 44.85.

The eighth and final qualifier for the final later today was Anderson Henriques of Brazil, who ran 44.95.

As day four unfolds on Tuesday, high jumpers Donald Thomas and Ryan Ingraham will contest their spots for a spot in Thursday's final of the men's high jump.

Also, Jeffery Gibson will compete in the semifinal of the men's 400m hurdles in his bid to get into Thursday's final.