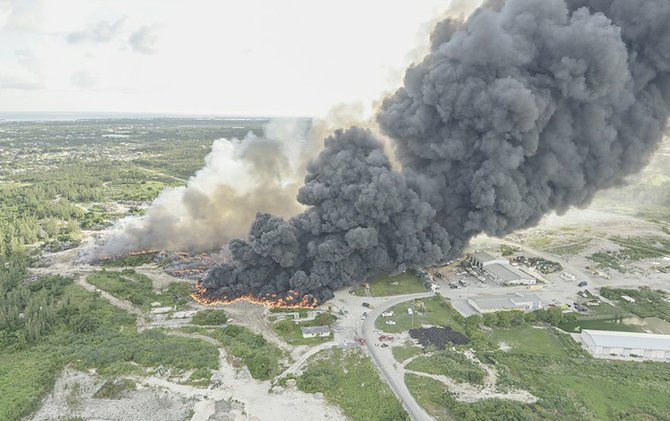 A MAJOR blaze at the city dump, believed to have been sparked sometime around noon, sent “heavy plumes” of black smoke into the sky as fire fighters responded to yet another fire at that location.

The flames were fed by thousands of tyres and pallets at the dump – although the exact cause behind the fire is still unknown.

Fire Chief Walter Evans was at the scene and said the fire could potentially burn for days. Officials were working towards containing it, he explained, with heavy equipment on site to assist.

Department of Environmental Health Services employees told the press when they first noticed the fire that it was about the size of a car. By the time The Tribune arrived at the scene, the blaze had spread to encompass thousands of tyres.

Shedrick Forbes, field manager at DEHS, was at the scene, working, when the fire happened.

“One of the employees came to me and told me that there’s a fire on the site,” Mr Forbes said. “When I looked, I saw this big blaze. Not what you would see now – it wasn’t that big, but you could see what was going on. It was about the size of a car and it just grew.”

He said he then called fire services who responded “in a reasonable time” and began working to contain the flames.

Supt Evans said officials were notified of the fire shortly after 1pm and upon arrival about 9 minutes later, met “a very, very large area in the advanced stage of burning” with flames reaching up to 50-feet high and “heavy plumes of smoke.”

Environment Minister Kenred Dorsett was also on the scene. Noting the city dump is prone to fires, he dubbed the situation “tragic” and said Cabinet is currently considering a proposal that could prove to be a “solution” for the long-standing city dump issues.

“It’s an area that was supposed to have been manned to ensure that this sort of thing does not happen, but clearly it has been in the worst possible area where we have tyres and pallets,” Mr Dorsett said.

“The police have responded in very good time, we have the first set of emergency responders – heavy equipment on site trying to create a break between the fire and what remains, so that we can contain it; and it comes at a time when Cabinet has before it what I consider the solution for us.”

The minister would not go into detail as to what exactly that solution is, only offering that “when Cabinet approves it” the public will learn “all about the solution.”

He said further: “The sooner we move ourselves to where we transform this into what I call a green park, where we mind these landfills ourselves and move the hazardous waste here and get this environment in a manner where it will not subject us to this kind of nonsense, the better.

“It’s a little frustrating for me because we had manpower engaged to man the various aspects of this site to ensure that this would not happen and so I’m going to wait for a report from my DEHS staff to help me to understand why this has occurred.”

Mr Dorsett added that public health has been informed about the blaze and the Minister of Health will “mobilise his team” to ensure residents of the surrounding area will have health services readily available if needed. He noted respiratory issues could arise as a result of the smoke.

At 6 o’clock last night, Supt Evans said officials had contained the blaze and were still on site with several fire trucks. However, residents returning to the western end of the island by boat said that after 8pm thick black smoke was still billowing for miles out to sea. “As we came in,” one of them said, “we could see the lights of planes flying through the smoke as they approached the airport.”

The dump has been plagued by recurrent fires, for years. The most recent dump fire incident, not including this one, started four months ago in April. Officials had struggled to get a handle on that fire which smouldered for weeks.