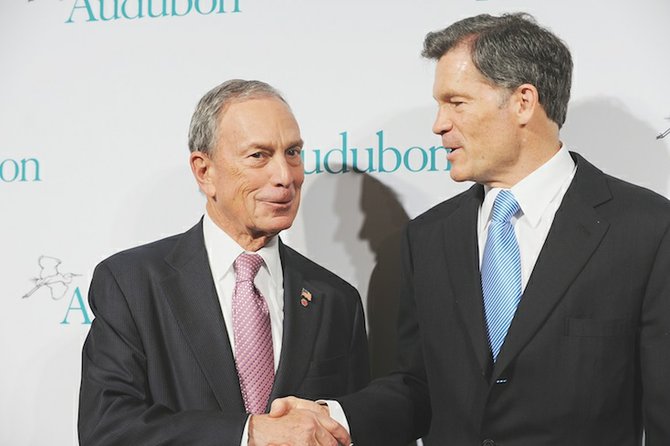 DECLARING it a model that will serve to help cities around the world survive catastrophic weather events that threaten human lives, wildlife and habitats, New York Mayor Michael Bloomberg introduced a unique, all-star team of research institutions and non-profits, thanking those who made its creation possible, including the National Park Service, Rockefeller Foundation, Secunda Family Foundation, National Grid and Bahamas-based billionaire Louis Bacon.

Dozens of high-ranking officials and leaders gathered to hear Bloomberg’s words of appreciation to public and private sector partners during the August 13 ceremony at Jamaica Bay to launch the new Science and Resilience Institute.

Against the balmy backdrop, complete with kayakers on the bay, members of the media and the National Park Service, scientists and academicians were reminded of the stark contrast to this area almost year ago when Hurricane Sandy, the second costliest hurricane in history, devastated Jamaica Bay and the Rockaways and so much of the east coast.

It was here at Jamaica Bay that non-urbanised nature showed the power of resilience, said experts, with the untouched wetlands and natural woodlands protecting the vast bay, now serving as an example of strength against even the worst conditions, making a fitting site for the institute.

The City University of New York will head up the institute with Columbia, Cornell and Rutgers all participating.

“I wanted to thank some of the people who have been crucial to the success of this partnership,” said Mr Bloomberg, noting the National Park Service, Secretary of the Interior Sally Jewell who was present, and others.

He also said that the Jamaica Bay Science and Resilience Institute could not have become a reality without the help of the private sector.

“We also thank the private sector and philanthropic partners whose generosity is helping make those efforts possible and that includes Louis Bacon and Ann Colley of Moore Charitable,” said Mr Bloomberg.

His appreciation came days after Mr Bacon was honoured for his contributions to preservation by another New York entity, the Peconic Land Trust, which celebrated its 30th anniversary by recognizing two families it said had made a difference to the achievement of its goals of conserving Long Island’s working farms, natural lands and heritage.

In January, Mr Bacon received the prestigious Audubon Medal in recognition of his lifelong commitment to conservation.

In April, Forbes magazine named Mr Bacon one of the world’s greenest billionaires.

In June, Mr Bacon announced an agreement he reached in 2012 with Colorado Open Lands to place 21,000 acres of Tercio Ranch and Red River Ranch into perpetual conservation easements.

This effort follows Mr Bacon’s 2012 agreements with the US Fish and Wildlife Service (FWS) to place approximately 167,000 acres of the Trinchera Blanca Ranch in Colorado’s Sangre de Cristo Mountains into perpetual conservation easements.

These mark the largest conservation easement donations received by FWS, as well as the largest in Colorado.

Thanks to a Safe Harbour Agreement between NC Wildlife Resources Commission and Orton Plantation Holdings, LLC, which is owned by Mr Bacon, more than 8,400 acres of open pine forest in Brunswick County will be managed in order to benefit many native wildlife species, with an emphasis on the red-cockaded woodpecker.

In the Bahamas, the Moore Bahamas Foundation is working with local organisations to help protect and restore both the Nassau grouper and the conch population and to preserve fragile coral reefs and the crystal clear waters of various bays that add to the beauty and allure of the 100,000 square-mile open ocean archipelagic nation.