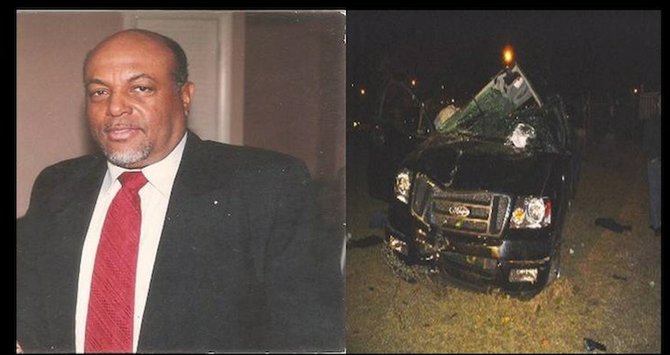 This image, provided by Regina Smith, shows her father and the accident scene. She is campaigning for a change in Bahamian driving laws

MORE than 200 people have signed a petition urging the Attorney General’s Office to revisit laws which apply to persons who are convicted of harming or killing a person while driving recklessly.

The petition on www.change.org was created by Regina Smith, a young Bahamian, after her father was killed when his car was hit by a young female driver, who did not have a driver’s licence or car insurance, on December 19, 2012.

Speaking with The Big T, Ms Smith said: “This matter was finally taken to Traffic Court on April 3 where the young lady was charged with killing in the course of dangerous driving, driving without a driver’s licence, and driving without insurance.

“The owner of the car was charged with allowing his car to be driven by an unlicensed driver who was not insured. They both pleaded guilty and were fined by the magistrate. The young lady’s fines totalled $6,000 and she has to undergo counselling.”

Regina Smith’s family feels that the system failed them.

“There is nothing to assist the family who now have to live without their loved one and have to pick up the pieces. We are not offered counselling or anything. This petition is our way of turning our grief and frustration in a positive direction.

“This is not an instance of looking for revenge, but there are people who causing traffic fatalities in the Bahamas who are not paying long term consequences. Individuals need to receive a penalty that more rightly reflects the weight and consequences of their irresponsibility.”

Ms Smith said she has written to Attorney General Allyson Maynard Gibson about her concerns and hopes her office will revisit the law once the petition, which was launched a few weeks ago, reaches its goal of 2500 signatures.

“In my opinion, the young lady should not be allowed to ever apply for a driver’s licence and persons who do have licences in these cases should have them at the least revoked or suspended. But that is something that we hope the AG’s Office will look into and that they will see fit to change the existing laws.”

The petition has 205 signatures to date.

One signatory said: “Until appropriate penalties are put in place and enforced, more and more people will drive without being licensed to do so and without insurance. This is not acceptable when only damage is done to the automobiles of those of us who obey the law and are licensed and insured but we are left with the cost of damages caused to our vehicles by someone else who is not; it is reprehensible when it causes loss of life and the responsible party gets only a slap on the wrist.”

Another person said: “These families lose not only life, they also lose hope when nothing is done about the loss that they have suffered. Sure, I feel that mistakes should be forgiven, we do live in a Christian nation. However, our actions cannot be forgotten. A world without justice will never succeed.”

Where is this petitionnnn? Because, the same thing happened to my spouse one month after we were married. The only thing is, he did not die. The person driving was DRUNK and had no license and no insurance and was using his mother's car. They both were unconscionable and pretended it never happened, while my spouse remained in hospital. The stress got to the mother so much however, that she ended up being admitted to hospital for high blood pressure problems ...and we did not want to cause any more distress, so we waited for her to get well before we even approached them about compensation for our loss. She initially came off so nice when we met with her, and agreed to pay us for the loss of our vehicle. ( we did not even ask for payment for medical bills). Then upon the advice of God knows who, she turned on us and was like -oh the courts didn't say who is in the wrong, so she ain't doing nothing. In other words, me and my whole family could go to hell and burn to a crisp. The case went to court and we still did not get any compensation and they only got fined after being told they were in the WRONG...and went on with their lives as if our lives were not affected. People told us to go and sue them in civil court but you know what, I said, I leave them in God's hands. He never sleeps and He is vigilant about vengeance on behalf of His children. We don't have to do anything...but will be signing that petition. My spouse could have died, my car - which I only had one more year to pay on and was the only car for the household got written off ...and the justice system told them to pay five hundred dollars and society will love them again. Garbage. Thing is, the mommy had her two sons in the car...one had a driver's license and was on the car insurance but the mommy had gotten mad with that one and to be spiteful, gave the keys to the uninsured son the night before to get back at the other one... pitiful! They have no conscienceeee!!! We have not even gotten so much as an I'm sorry. I did not even lose my spouse and I am still hurt by this and so I can only imagine what this family must be going through to actually lose a loved one. Sign on people...sign the petitionnnn!!!

The car I was traveling in was hit by a drunk driver; he was killed. I was almost killed as well - seat belts saved me. He was insured but his insurance company tried every means they could to get out of liability for my injuries. I hate going out at night now because there are so many drunk drivers on the road. As for the case in the story above, $6,000.00 for a life just shows the completely lax and irresponsible attitude people in authority have towards this matter. Perhaps they trivialize it because if they took it more seriously many of them would have to look at their own behaviour in this regard.

If you have lost a love one to vehicular homicide please join our facebook forum: Justice For Victims of Vehicular Homicide

I'm really sorry to hear of all your experiences. But do realize that you are not alone. We are all in this together and if we pull together we can make a difference.

This is a well written and interesting article! I like cars a lot and I am having a race car in my garage. Moreover I have some old cars too and I am very proud of them. Recently I had an accident while driving my old car and a team from http://www.blueskyclassiccars.com/cla...">BlueSkyClassicCars.com repaired it quickly. Even if I like speed a lot I am very careful when driving as I don't want to have an accident.

This is a very interesting post! Last year I had a terrible accident and my sister was hurt. The car breaks were not working anymore when I crashed into a tree. Luckily, after a few days of treatment my sister was fine but my car was completely destroyed. Two months after that I've bought a new car from an http://www.chuckstevensatmore.com/">atmore dealer and I am very satisfied of it as it is safer.

I believe that reviewing this laws is very useful because too many people die because of other people's reckless driving. If they wanna have more success with it they should ask counseling from http://www.matthewslaw.com/">Matthews & Matthews also.

I lived in Nigeria for a couple years and still travel back often for work. The people will kill you there if you hit someonehttp://www.casualcollision.com/profil...">. Mob justice is something else and if you haven't lived in a country like this you can't understand how dangerous it is as a foreigner.

If these people were to have stopped or stayed in the country after this had happened there likely wouldn't be any establishing fault there would only be people seeking justicehttp://www.kidsgamehouse.com/profile/...">.

Also in Nigeria the police can often be the most dangerous of people. I have had to outrun corrupt police threatening to arrest me for fictitious reasons if I don't pay them huge bribes. I have no diplomatic immunity so the dangers are even that much more real for me. I even had to save a friend from a mob once after he got in a crash. That was one of the scariest experiences of my life. The power of a mob of people is a crazy thing.

I appreciate a lot this great and quality article! I've recently talked with a friend of mine who works at the http://www.nlpa.com/appeal.html">National Legal Professional Associates and he was right when telling that even if the authorities revise laws which apply to persons who are convicted of harming or killing a person while driving recklessly it is necessary to organize preventive driving campaigns in order to avoid accidents.

I'll impart this to my companions also The post is composed in exceptionally a decent way and it involves numerous helpful data for me. http://instantloansforbadcredit.net/">bad credit loans

Decent blog and completely extraordinary. You can improve however regardless I say this perfect.Keep striving generally advantageous. http://chaturbatetokenshack.com/">check out this site for chaturbate free tokens

I feel truly expresses gratitude toward you significantly for utilizing the decent administrations as a part of this site which to energizing information is really show in this site. http://topnocreditcheckloans.com/revi...">bad credit loans long term