Young Child Dead, Mother In Hospital After Hit And Run 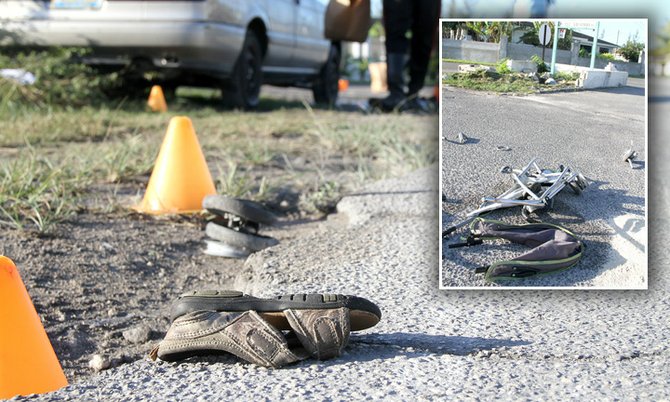 Scenes from the site of the accident. Photos/Tim Clarke

A YOUNG child is dead and his mother is in critical condition in hospital after they were the victims of a hit and run accident early this morning.

Police say the mother was walking east in St Vincent Road, pushing her child in a stroller, when they were hit by a Ford Explorer travelling west.

The child was dragged several feet and died at the scene. The mother was taken to hospital were she is in critical condition.

The driver did not stay at the scene.

Police believe the vehicle was a dark coloured Ford Explorer.

Police are asking for anyone who may have been in the area to call them immediately.

My heart is hurting right now... People PLEASE SLOW DOWN!!! I hope someone saw who the driver was and turn them in. This is so sad a young innocent soul. I am devastated and upset at the same time. I pray that the mother would be fine and may God be with her through this time of sorrow. I can only imagine this being so hard to deal with especially during the holidays :(

Sorry to hear this, people do need to slow down but the police road traffic education programme needs to focus on pedestrians as well. May not apply in this case but the look both ways, cross at the cross walk and stay on the sidewalk need to be reinforced.

Also what about situations where those in authority turn a blind eye until something tragic happens. By saying that, year after year individuals acquire a spot on the R. M. Bailey park to sell their goods. Don't get me wrong in thinking that I'm against a person making a living. However, did anyone ever stop and think with the stalls so close to the road it creates a road hazard when shoppers spill over the sidewalk onto the streets when shopping, or when motorist stop directly in traffic to inquire about goods for sale. Why not let the stalls be set up more on the interior of the park to allow shoppers to be out of the way of traffic

Agree with the above but there aren't a lot of sidewalks for people to walk on. We don't know the circumstances as to what happened and no one has the right to hit and run... pedestrians need to be careful when in the street and especially when they have children with them. Whomever hit these people needs to turn him/herself in. Do the right thing.

I hope they don't sleep and they could hear that baby crying every time they close their eyes... Our people too like to speed. I always tell my child to be careful in the parking lot where I live because the drivers speed through there like they are at NASCAr and if someone hit my child, I'm going to have to go all HULK on themmmmm ..

if only we had people to enforce the traffic laws... No one pays attention until someone is dead, sad in this case and if the driver is caught he should be charged with murder, but whats the point if he'll be out on bail and walking the sstreets for 3 years until his case comes around

These must be the devil him self, how can you hit a BABY (human) and just ride off man.

It seems that history has repeated itself once again. This is what I read at the beginning of January 2012.

AN 18-year-old woman became the first traffic fatality of 2012 after crashing her car into a wall early yesterday morning.

The incident occurred around 4.20am on Blue Hill Road, at the corner of St Vincent Road.

The victim was driving a green 1999 Honda Accord carrying two passengers, a male and female, when they collided with a red 2007 Ford Explorer, driven by a 46-year-old man.

A hit and run - what has our people become? It seems a bunch of heartless bodies. What a shame, to run over a baby and it's mother and leave them there. It's down right murder and attempted murder. He or she is not dead yet, but may his or her soul REST IN PEACE. The baby will rest in peace and I do hope that the mother pulls through it.

Which witness is correct? The witness stating the vehicle was a ford SUV or the witness stating it was a silver Honda #2694777. Because of the nature of this accident, Road Traffic should have already posted the name of the registered owner of the accord if so.