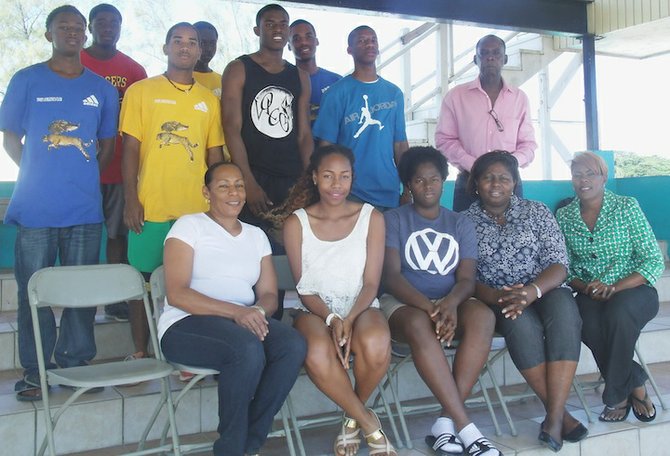 HARRISON Petty, president of the Bahamas Parents Association of Track and Field, hosted a welcome home ceremony on Friday at the original Thomas A Robinson Track and Field Stadium for the athletes whom they helped to get off on athletic scholarships.

“The programme has really taken off to a new level,” Petty said. “The athletes are qualifying for the scholarships and they are doing well in school. We’re seeing a lot of better grades from a lot of them.”

With 13 athletes afforded scholarships this year, Petty said the numbers of athletes who have benefitted has far surpassed their expectations and once they can get athletes to maintain a 2.40 grade point average, they will have an opportunity to get involved in the programme.

Here’s the reaction for some of the athletes:

Alexandria Marshall, a 19-year-old student of Commonwealth Community College, said she’s looking forward to competing in 2014. “It’s been a little different in terms of the weather, but it’s been a good semester so far,” said Marshall, who competes in the throwing events. “I’m looking forward to good grades and training well.”

Marshall said it’s not a big difference in her new residence, but she’s making the most of it. She’s even training harder than ever to get ready for the 2014 collegiate season that will start with indoors in January.

“Hopefully I can PR and make the national team for some of the senior events,” she said. “I also want to become the national champion in the women’s javelin.”

Marshall said she’s trying her best to balance both academics and athletics. Her GPA is 3.4, but she hopes to improve on that next year because “I always try to do the best I can and if I don’t do that, I don’t like it.”

Michael Burns, a 20-year-old at Allen Community College in Iola, Kansas State, as a triple jumper and sprinter, Burns said he’s been training hard to get ready for the upcoming season.

“Practice starts about 5am in the morning and continue until about 4pm in the afternoon,” he said. “I’ve been practicing very hard for next year.”

“I am striking a balance. My GPA is right there, so I’m on a roll,” he said. “I’m putting my school work first and track is second. Our coach also makes sure that we put them in that order because he works closely with us.”

Burns said having a mother who is always pushing him has enabled him to go out and achieve his best.

“I went over there for track and to get an education, so I try to stay as focused as I can on both,” said Burns, who has a 3.46 GPA.

Deandra Deveaux, a 20-year-old at Southern University in Baton Rouge, Louisiana, said at the beginning of her journey to school, she had to get adjusted to the weather.

Deveaux said the opportunity presented by the Parents Association has definitely made a difference in her life and the life of her family because they didn’t have the income that was required for her to go to school.

Now for the sixth consecutive semester, Deveaux has been named to the Dean’s List and as a student-athlete, she knows the importance of putting her education before athletics, so it’s not been an issue for her.

As a reward for her success in the classroom, Deveaux said she’s been offered the opportunity to travel to Brazil. China, Morocco or Guna for her internship in agricultural science with a concentration in plant and salt science.

Carlos Outten, a 16-year-old student at St Augustine’s College, said as a 200/400 metre specialist, his goal is to make the Carifta team and the World Junior Championship next year. He knows that he will have to run at 46 or even 45 seconds in the 400 and 21 in the 200 in order to achieve his goal.

Maverick Bowleg, a 19-year-old at Southwest Baptist in Bolivar, Missouri

Having made the adjustment to the change in weather, Bowleg said he’s looking forward to 2014.

Bowleg thanked the Parents Association because it’s been a blessing for them assisting him and his family. He currently has a 3.04 GPA, but Bowleg said he’s looking forward to improving on that because he wants to transfer to a four-year institution and that means that his grades have to be better than they are now.

“My goals are to run some personal best times so I can please myself and do what God allows me to do this year,” said Smith, who is aiming for 51 in the hurdles and 47 or 46 in the 400.

“School has been good for me. I’m doing pretty good up there, less distractions,” he said.

At least two parents expressed their gratitude to the Parents Association for their support.

Denora Marshall, mother of Alexandria Marshall, said her daughter is much more focused on her education and so she’s pleased with her achievement.

“As a single parent, you are always grateful when you can get help like this to make end’s meet,” she said. “So I’m really appreciative that they have presented these scholarships to the athletes and we want to encourage them to continue to do it.”

And Rozina Burns, mother of Michael Burns, said she’s very proud of her son because he’s focused on the goal that he went to school to accomplish. “He has made me so proud because he is so focused and he knows what he has to do,” she said.