AN outstanding trial transcript has again delayed a magistrate’s ruling in the possession of dangerous drugs with intent to supply case of a contractor and his former girlfriend. 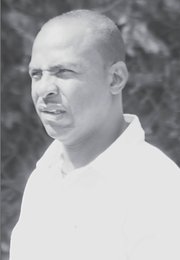 This means that 43-year-old JFK Construction head Carlos Lamm and his former girlfriend, Laticha McKenzie, will return to the Magistrate’s Court on Monday for the verdict in the nearly four-year-old drug case.

Lamm, of Gray’s Terrace, and McKenzie of Pinewood Gardens, are standing trial charged with possession of dangerous drugs with intent to supply on March 9, 2009.

It is claimed that the pair, on the day in question, were in possession of three and a half pounds of marijuana.

In October last year, McKenzie testified that she had no knowledge of any drugs. She also denied that she told police the narcotics belonged to Carlos Lamm.

Lamm himself in November, denied having any drugs and said that on the day in question, a man in a camouflage outfit, who he could not identify, tried to get inside his rental car while he, his daughter, former girlfriend, and another man were in traffic on Bernard Road.

He also claimed to have no knowledge that the men pursuing him on a chase were police.

In December, Murrio Ducille, who represents McKenzie, said prosecutors had failed to prove that his client knew of the drugs that were in the rental car.

Jiaram Mangra, Lamm’s attorney, said the discrepancies in the testimony of two police officers were too great concerning whether they were in a marked car or if the sirens were on.

He further added that there were different accounts from the officers on where the drugs were thrown from the car. He said those discrepancies discredited the prosecution’s case.

In response to the submissions of the defence attorneys, ASP Ercell Dorsett said the prosecution had presented strong evidence that both defendants knew drugs were in the car when they were arrested by police.

Deputy Chief Magistrate Carolita Bethell was expected to make a ruling on that matter on January 16. However, she said that two of the three trial transcripts came in late and the other had to be retrieved.

She said that she was prepared to deliver the ruling late in the afternoon but there was no guarantee that the transcripts would be available in a reasonable time.

January 31 was the agreed date for the ruling. However, the final transcript was still not ready and the ruling was stood down to February 4.

He'll get off because he is a PLP supporter and was here in Abaco during the bi-election working the people for a win.

He will get off, you watch.