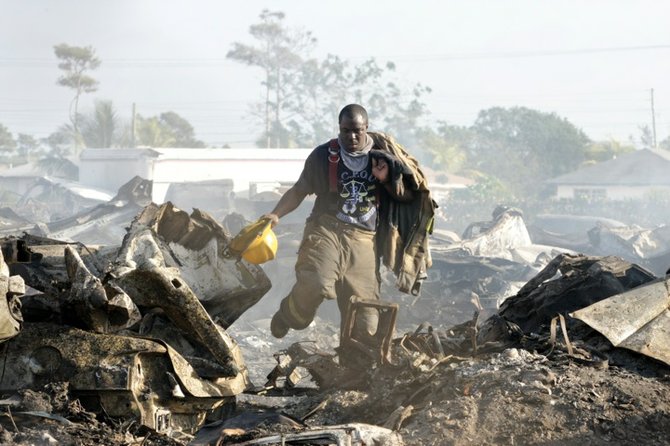 A DERELICT car dump fire in southeast New Providence forced residents of Misty Gardens from their homes yesterday while firefighters worked to extinguish the blaze.

Fire Chief  Superintendent Walter Evans said the thick smoke engulfed the area in a matter of hours and became hazardous to neighbouring communities.

“Just after 6am we received information of a fire off a Marshall Road at a derelict car dump site.

“We responded and sent one unit but when they got there realised they required more assistance. A large area was burning and the smoke was blowing in the area of Anatol Rodgers and Misty Gardens. We got assistance from the Department of Environmental Health because of the amount of metal that was burning,” he said.

“We were concerned about the safety of the firemen and so we needed heavy duty machines to create a fire path or a fire break to stop the fire from spreading into other areas. We had two engines and 10 men working to extinguish the blaze. The smoke was a major concern for us.”

Supt Evans said police believe there is a strong possibility that someone is setting fires in this location as they have been called there many times.

Luckily, the Anatol Rodgers school was closed for the day. However, Bahamas Union of Teachers President Belinda Wilson said she is not sure if the school closed because of the fire or for other reasons.

“When teachers got to the school they noticed the smoke, they also noticed the gates were locked so they went home. So, at this point I do not know what is going on,” she said.

Scores of teachers refused to return to their classrooms on Monday and Tuesday, protesting what they described as mould in the classrooms and toxic smoke surrounding the campus.

Education Minister Jerome Fitzgerald said his ministry, with the ministry of environment, was handling the situation.