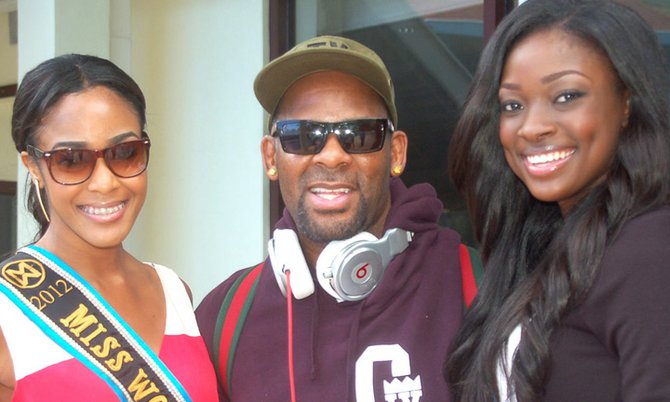 R&B SUPERSTAR R Kelly is excited about his first ever performance in the Bahamas, saying that one of his greatest joys is travelling the world and inspiring people with his music. The 46-year-old Grammy-award winning singer said fans attending tonight’s “Celebration of Love” concert at Arawak Cay can expect the unexpected when he takes the stage.

“I almost feel like I am on vacation and not here for a concert, but I’m going to do what I do, and you can expect the unexpected,” he said at a press conference at SuperClubs Breezes yesterday.

“The show is planned, but it will be somewhat random, because I like to study my audience before and come out with new ideas. But I am going to come out and have some fun,” he said.

Martiniqua Moxey, winner of the R Kelly Facebook competition, asked the singer: “Why did it take you so long to perform in one of the most beautiful countries in the world.”

He said: “What took so long for the Bahamas to invite me?”

He said he was having a great time and was looking forward to enjoying the beach and meeting Bahamians.

R Kelly’s long career has included hit songs, and Bahamas’ favourites, I Believe I can Fly, I’m the World’s Greatest and Bump n’ Grind, and the ‘hip-hopera’ Trapped in the Closet. He said he tries to remain relevant by writing “life” and not songs.

“I am a mamma’s boy and my mother always told me to just write about my life rather than songs, and I would always be in the game. I record the news which means that there is not just one type of music or sound I create. I write from my heart and from what inspires me. And I am a homebody. I know a lot of artists like to fly all over and do performances, but I like to stay in my lab in Chicago and write new material.”

He has worked with Michael Jackson, Ron Isley of the Isley Brothers and Jay Z, stars who “remind me of me.”

And he added that while he has worked with well-established artists, he wouldn’t mind working with some of the industry’s upcoming talent in the future.

“I would enjoy working with new fresh talent and any other artist with a strong passion for creating music.”

The singer also told reporters that he can see himself recording a full gospel/inspirational album in the near future.

“It is definitely in me to do it, but it will come out at an honest time.

The concert at the Seaside Pavilion starts tonight at 9pm, doors open at 7pm.