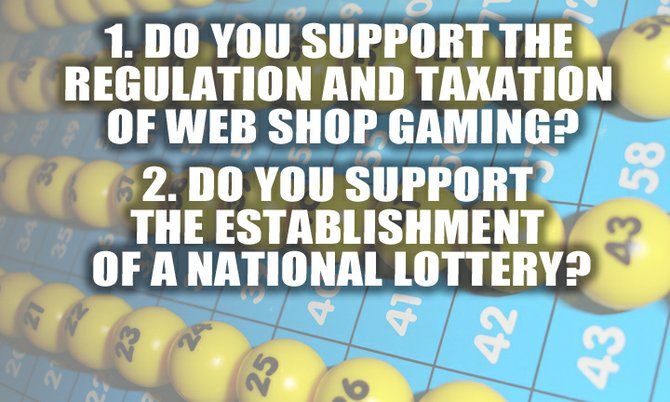 THE TWO questions for the January 28th gambling referendum that will decide the future of gambling in the Bahamas were revealed last night by National Security Minister Dr Bernard Nottage.

In his national address to the country, Dr Nottage announced the questions in accordance with the order of Governor-General Sir Arthur Foulkes who, yesterday, ordered for a referendum on the issue to be held on January 28.

“As stipulated by that order,” Dr Nottage said, “Bahamians will be presented with two questions.”

“Fellow Bahamians, the procedures to be followed in the conduct of this national Referendum for the most part mirror those that are followed in voting at General Elections for members of the House of Assembly. However, in the case of a Referendum there are no political candidates. Instead, as indicated there are questions to which the voter is to answer

The Parliamentary Commissioner will hold a briefing session with Local Observers to advise them of their role in the referendum prior to the advanced poll.

Dr Nottage also emphasized that only those who were eligible to vote in last year’s general elections will be allowed to vote in the polls of the gambling referendum.

“Persons who reached the age of eighteen (18) after May 7th and all other eligible Bahamians who have not yet registered may still do so. The voters register will close on the 10th January 2012. Anyone not registered by then will not be eligible to vote.”

In last night’s address, important dates in lead up to January 28’s referendum were also touched on.

Regarding persons interested in voting but unavailable on the day in question due to being out of the jurisdiction or other reasons, the minister said that an advanced poll will take place on January 21.

persons who are desirous of voting in the advance poll either as an overseas voter or a special voter have until Thursday, 10th January, 2013 to submit the relevant completed application form to the Parliamentary Commissioner.”

“For those persons who reside overseas, a completed Form J must be submitted. Special

voters, namely election officials, those who on referendum day are likely to be

While it was noted that there would be no election agents in the referendum, regulations “empower” the minister to appoint a maximum of three local observers per polling station to ensure fairness of the process “including at least two persons representing the views of those members of the public interested in the “yes” and “no” vote.”

“The appointment of the Local Observers shall be made in writing and signed by the Minister,” he added.

The minister concluded his address by highlighting the importance of the populace voicing their issue and position on the regulation and taxing of Web Shops and the establishment of a National Lottery.

“Let me remind you, that while for the purposes of the efficient management of the Referendum you will be voting

within your constituency, the results of the Referendum will be determined by a simple majority of the total number of votes cast nationally for each question.”

should consistently reflect the collective will, desires, aspirations and sensibilities of you the Bahamian people. We pledge to be guided by this fundamental ethical and democratic principle through all of our deliberations on your behalf.”

“The Government of The Bahamas encourages all Bahamians to exercise their right, to express their views freely, to conduct themselves peacefully and to be tolerant of the views of others,” he concluded.

So, Comrades now we know two things which only the four "YES" vote pastors were taken into the PM"s confidence to be revealed to in secret about two weeks back.The two questions being asked on January 28, 2013 are now known by the public and that PM Christie's PLP government will legalize the web shops, if but only a simple majority, that being 51/49, votes "YES."

My earlier post posed the question why is there complete silence from the business community who should be placing monies behind the "NO" vote to stop the legalization of the criminal numbers rackets, being they must understand that for every dollar their customers spends on chasing numbers to drop, it is money in the multi-millions that Bahamians are not going to be spending at their local business establishments?

It's a damn shame that the only organized "NO" vote campaign that is being mounted is being done on a slim budget by clergy loyal to Jesus.

My Comrades if Bahamians refuse to turn out to vote "NO" against these PLP hired gun politician snake oil salesmen, peddling the "YES" vote, it will prove that in we in Bahamaland just can't fix stupid folks messed-up heads?

So here is a question for you...on the oher papers website there is an article with the Minister of Tourism saying that if the Bahamian people vote YES to legalizing the webshops, they will likely be shut down for close to 3 months to restructure...what happens if Bahamians vote NO to legalizing it...do they carry on with business as usual?

What a tricky way to word question 1. All it asks is if you support regulating and taxing. Nothing about if you support them operating in the first place.

The wording in question one is not tricky it is deceptive, misleading and ambiguous. The question inherently presumes that the activity is currently legal and all that is required is to decide whether or not it ought to be regulated and taxed. If the government currently believes that operating web shops are currently not against the law then they should come out and say so. Otherwise they should amend question one to be more clear and unambiguous. And they say they don't have a horse in the race. That's what we voted for!

This does nothing for the gambling issue. Mentions nothing of a constitutional change.This actually is saying gambling is legal!. How can you be asked to regulate a so called illegal actvity. Something can be legal and not regulated. Example the price fishermen charges you for fish on the Dock. First you have to ask whether it should be legal or not. Our Constitution already falling apart at its bind. All this will do is further cloud the issue which I think is its intent in the first place.

What we need to do is BOYCOTT THE REFERENDUM! Don't give them the numbers to move forward with anything. And make our government present with a plausible Constitutional change not a referendum on policy implementation. Make it clear where we as Bahamians stand legally when it comes to gambling.

How you can save $30 each week on the household food shopping is really as simple because always shopping having a shopping list and not simply wandering round the supermarket and obtaining items which take your own fancy. buyonlineguru http://www.buyonlineguru.com">link text

The easiest method to get close to in Europe personally is the actual budget air carriers of Simple Jet as well as Ryan Atmosphere; they are usually dirt inexpensive. The local trains within each nation also often much cheaper compared to Eurorail locomotives. In Germany for example, it is a lot cheaper to visit on the actual regional locomotives. I such as your tips about the chartering – in no way knew regarding those businesses! cabinsinontario http://www.cabinsinontario.com">link text

The main questions that was discussed at the referendum was whether or not casinos and all businesses that rely on gambling should pay more in taxes. I know this from an insider at http://www.lrcr.com/">LRCR, but I think casino owners are safe for now from any new taxes.