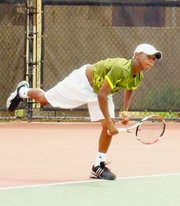 DESPITE being knocked out of singles play in his latest tournament on the ITF circuit, Bahamian junior tennis ace Justin Roberts stayed alive in the doubles draw yesterday.

Roberts and teammate Bart Van Leijsen of the Netherlands advanced to the semifinals of the 12th ITF Abu Dhabi Junior Championships  with a 6-3, 6-1 win over the No.1 seeds Alexander Braun of Germany and Alexandros-Georgios Vakouftsis of Greece.

In the opening round, they defeated Addulla Agli and Fahad Al Janahi of United Arab Emirates 6-1, 6-0 to advance to the quarterfinals.

In the first round, he defeated Norwegian player Christian Linge 6-1, 6-0 and in the second and third rounds he defeated Russian Lefty Robert Ziganshin 6-4 7-6 (4) and Efekan Bulbul of Turkey 4-6, 6-3, 6-2 respectively to advance to the main draw.

The 16-year-old Roberts is on tour under coach Michel Lentjes and his team at the Meppel, Netherlands Tennis Center of Excellence Academy (TCE).

In addition to playing in the tournament, the TCE players were able to participate in the establishment of an ultra modern TCE academy in Abu Dhabi expanding its presence in Europe, Middle East and USA. The Abu Dhabi facility features modern courts, fitness and educational facilities and exceptional coaches.

Roberts currently has an ITF ranking of 1,730.

His international training began in earnest in 2011 when he was one of 12 players selected for the Global Tennis Legacy Foundation (“GTLF”) training camp at Club Med, Sand Piper, Florida.

Said Roberts: “I am excited for this opportunity to train with some of the best juniors from around the world and to work with the GTLF experts on and off the court. It should be a great experience for me and will show me what I have to work on in future.”

He was also selected to the ITF-COTECC Touring Team for the COSAT Tour three times. He is the Boys U-14 Champion for COTECC, winning the U-14 singles title at the 2010 JITIC in El Salvador, South America, before advancing to compete in ITF B18 events.