A Successful Wedding Tale At The Dundas 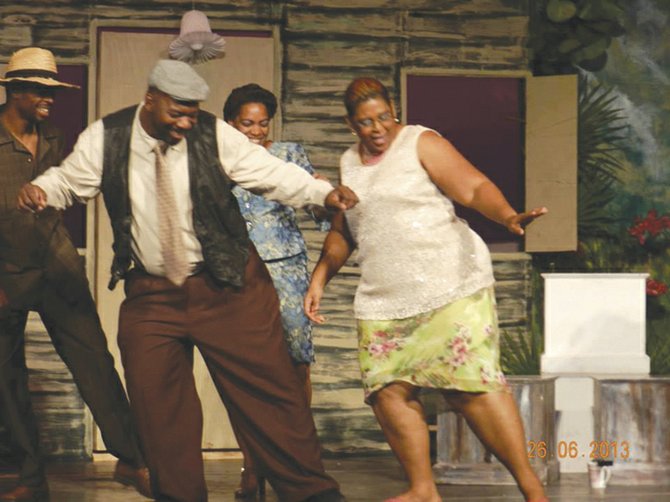 THE Dundas Centre was filled to capacity last week, as faithful followers and supporters of the James Catalyn and Friends shows gathered to watch the company stage their first production of the year, ‘A Weddin’ Tale.’

Long time members of James Catalyn and Friends, Chigozie Ijeoma and Dwain Wallace directed this comic stage play which took a satirical peep at weddings, Bahamian style. Opening up with a scene at a neighbourhood church, cast members who play Bernice, Jennie and Georgia are seen preparing for Mable’s highly anticipated wedding of the day. Mable, the only daughter of Drucilla, was portrayed as the apple of her eye. Drucilla is seen pressuring the ladies to quickly get the cleaning and decorating done in the church, as they were all pressed for time. The ladies were apparently doing more “gossiping” than getting arrangements in order. This scene also introduces the common law couple, Blanche and Lambert. One audience member, Krystal Smith, told Tribune Entertainment: “I enjoyed the fact that they used slang such as ‘people only attend weddings and funeral to gossip.’ They also referred to the word gossip as ‘gap seed,’ and this is so true in The Bahamas, it is very funny but it is true. Half of the time people sit outside the church to gossip about who has on what and so on.” Additional scenes in the show included ‘The Wedding of the day,’ where the guest arrives for Mabel’s big event. Some of them wearing loud colours, floral and beach prints. After all of the excitement of worrying about who would appear in what attire, Mable became the talk of the town showing up to her wedding exposing her huge stomach. The ‘gap seed’ ladies Bernie, Jennie, Georgia and Blanche already got word that Mable might have been heavy before seeing her on her wedding day, so they were not at all surprised.

Drucilla however, was convinced that Mable was ill with gas pains and not experiencing a pregnancy. Even with all the mixed information, at the end of the day, Mable was a married woman. Leslie Ellis-Tynes, who plays the role as Jennie, said the show was a little nerve racking simply because it was the first night. She said once they worked off the nerves, they all got into character and they just went for it.

“We had a great time, I think everybody was really concentrated on just having fun. We knew once we did that, everything would just fall completely into place.” She added: “I have so many favourites in the show. At some points I think Drucilla was my favourite and other times Lambert and Georgie was my favourite so it is really just hard to pick one. The characters had so much life and colour so that kind of makes it hard to pin point just one single character.” For those that missed out on last week shows, Leslie encouraged Bahamians to come out and enjoy the event this Friday and Saturday. She said

“For anybody that hasn’t seen a James Catalyn play before, I think this is a great opportunity and experience to see what he is all about. He is all about preserving Bahamian culture and heritage and I appreciate the fact that James does so through comedy. Life doesn’t have to be so serious all the time and he likes to bring certain elements of our culture to light. I say give it a chance, come out and see the next couple of nights if you haven’t.” Director Dwain Wallace said for the opening night, he thought the crowd enjoyed the show and they had a good time. “It is very important that the cast enjoyed themselves, shake all the bugs off and had a good time as well. Once they are having a good time, the crowd is having a good time and it takes a lot of pressure off the directors because thats our whole objective,” he said. Mr Wallace said there is a lot of Bahamian culture that is interwoven into the play. “There is this scene about how you can’t see the person you are getting married to, the night before the wedding otherwise that means bad luck. That comes from way back when and we use to do some really silly things back in those days. It was important to parent in those days,” said Mr Wallace. He said:

“Everyone knew or at least thought that their daughter was a virgin when they got married. So we would hang sheets on the line to show the stains that will indicate when she slept with her husband, that would have been the first time she did so.” Mr Wallace said the only thing they are going to do now is sit down with the cast to make sure that they are even more familiar with their lines, and the production is a little tighter.