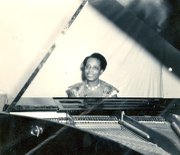 THE late Meta Davis-Cumberbatch almost missed her calling as a pioneer in the arts, when she was sent by her parents to Bristol University in the UK to pursue medical studies. Becoming a doctor was not something she liked or wanted to do, so instead of attending classes, she played piano and got lost in the world of music.

Following her innate desire Davis-Cumberbatch eventually became mother of the arts in the Bahamas.

She was one of several Bahamian composers celebrated during a concert last week.

The ‘Celebration of Bahamian Composers’ on Saturday featured Bahamian singer JoAnn Callender and was an official event to mark the 40th Anniversary of Independence this year.

It was of many musical pieces that Davis-Cumberbatch created during her time.

She was born in Trinidad in 1900, but spent most of her time developing the arts in the Bahamas.

The extensive work that she has done in developing and preserving what she considered the rich culture of the Bahamas earned her the name ‘mother of the arts’.

Dr Peter Maynard, grandson of Ms Davis-Cumberbatch, authored the book Great Awakenings which feared the life of the unsung Bahamian heroine. He said the drive and she exhibited was always something that intrigued him.

“What motivated her was something I was curious about. It turns out that she was really gifted at birth. As a child she would spend most of her time on the piano. From birth she was passionate about the arts. There were so many artistic and cultural forms that were not being widely expressed. She saw that the arts in the Bahamas was very fertile. She made a great impact on people’s life. She saw her purpose as developing the arts in the Bahamas,” he said.

Despite her noticeable gift, her father wanted her to become a medical doctor. He sent her and two of her sisters to England to become doctors.

“Her tutors contacted her parents and asked them why were they forcing her to do it. Finally her father agreed and sent her to the Royal Academy of Music in London, England,” he told Tribune Woman.

There, she specialised in piano and pursued a career as a concert pianist. She performed in London, New York and other metropolitan areas in North America and the West Indies.

Mr Maynard also became one Davis-Cumberbatch’s many students and learnt a true appreciation for the arts. She influenced many others including Hubert Farrington, pianist-turned-dancer and the country’s first ballet dancer, the late Clement Bethel, former concert pianist and Chief Cultural Affairs Officer, Winston V Saunders, and more.

Davis-Cumberbatch wanted to develop the arts in general, and taught many how to crochet, make straw pieces even while sick.

One of the ways she sought to fully develop arts in the country was through the establishment of a festival.

She launched the Festival of Arts and Craft which was hosted yearly. This also led to the formation of the various drama groups and eventually the Dundas Centre for the Performing Arts. She was responsible for having the stage installed in the Dundas, as it was very difficult to find halls in which to perform in those days.

Mr Maynard along with others are seeking to revive the festival.

“The rooms at the Dundas would be filled with straw work, paintings. She organised all sorts of events there to expose the arts. Then there was an event called Bahama-rama, and she was instrumental in putting together material for it. She was also responsible for providing content for the Goombay Summer festival.

During, Mr Maynard said she also sought to define what being a Bahamian was about, a question that was raised nearing the historical events of Majority Rule and the Bahamas’ independence.

“This was another fundamental area she and the festival made a tremendous contribution to,” he said.

Davis-Cumberbatch was recognized by The Queen and was made MBE for her contribution to the arts in the Bahamas. She also became the first woman to be awarded the Distinguished Citizens Award for the arts by the Bahamas Chamber of Commerce.

Davis-Cumberbatch died in the 1980s.

Her legacy lives on.