Man taken to court by Tribune242 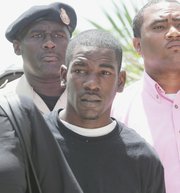 A TEENAGER was charged in Magistrates Court yesterday afternoon in connection with the robbery and rape of a pastor’s wife.

Thorne Cooper, 18, of East Street was flanked by police officers as they brought him before Chief Magistrate Roger Gomez to face charges of robbery and rape.

The crimes are alleged to have been committed by the accused on Saturday, June 15, with the victim being a 51-year-old woman who was cleaning the church in which she held a prominent position. She was robbed and sexually assaulted by a man she did not know.

Cooper was not required to enter a plea to either charge because they are both indictable offences. He can expect to be served with a Voluntary Bill of Indictment on September 2.

“The matter,” Chief Magistrate Gomez said, “will go straight to the Supreme Court which should speed up the trial process a bit.”

“On a charge of rape, you are not eligible for bail in Magistrate’s Court. If you want bail, you’ll have to apply to the Supreme Court,” the chief magistrate said.

Cooper was remanded to Her Majesty’s Prison until completion of his trial.

He was not represented by counsel at yesterday’s arraignment.

Very strange, and too sad, an 18yr old...Was he high on ecstasy? (Another one of our problems... Who is being paid to look the other way when illegal immigrants, guns and drugs are brought into the country? Who is living handsomely and respectably off the proceeds?)

How did they identify him so quickly? Good work.

Can anyone dispute that our society is enslaved by evil? What's the likelihood that this young man had he been born in a healthy society with a father and mother to nurture him, would have turned out to be a decent and motivated individual? Instead our country rears boys like this who have no understanding of what it means to be a human being - a lost generation inspired by a corrupt governing class. Bahamas, we are reaping what we sow.

This one has really baffled my mind? An old lady like that....wow! If he is not mentally challenged I can not even make up a story in my mind as to why he could have done that...no believable story that is. God help the young men in my country.