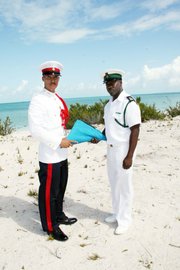 PETTY Officer Gladstone Moss and Constable Gilbert Knowles are well used to having to evoke patriotic sentiments in Bahamians raising the national flag at state and military funerals.

But the two have been putting their talents to extra use over the past few weeks in a whirlwind tour of The Bahamas.

A close look at the pictures The Tribune has been publishing of National Independence Flag-raising ceremonies reveals that Moss and Knowles have been on hand to help out in Inagua, Long Island, Mayaguana, Acklins, Crooked Island, San Salvador... and the journey goes on.

Travelling throughout the Bahamas and hoisting the Independence flag to the raucous applause of Bahamians in anticipation of the 40th Anniversary of Independence is an experience they feel privileged to perform.

Mr Moss, 49, a married officer from Nassau Village, who has been with the Royal Bahamas Defence Force for 27 years, said: “I feel it is an honour to take the flag to all the different islands.”

A father of three sons and three daughters, he said: “I feel honoured to represent the government and all the Bahamian people in this way.

“The reception we have received has been awesome. Administrators, counsellors and persons on the islands have been accommodating and when we get to the islands we discover that they have been waiting for us to reach.”

The officers have recently finished the first leg of their trip to every island in the Bahamas and they began the second half yesterday.

Constable Knowles, 35, of the Royal Bahamas Police Force, and from Fox Hill, has been married for 12 years and has three sons.

“My personal favourite stop was Governor’s Harbor because of the homely atmosphere and Crooked Island because the crowd stayed for the flag ceremony even though it was raining.”

Both men heaped praise on the different kinds of entertainment provided on the islands and the treats offered by islanders.

Mr Moss said: “Persons at Rum Cay had jelly coconut waiting for us. Grand Turtle Cay was off the chain as well because they had a Junkanoo rush-out. Some islands had a choir, others had a band.”

Reflecting on why they were chosen for the honour, Mr Knowles said: “I received a letter from the department I work for saying I was selected because of my efficiency in doing drill parades, my experience, my neatness and my appearance.”

Mr Moss said: “I think I was chosen because I am a reliable person and because in the military excuses are not tolerated.”

While they excitedly await the reception they will receive in the remaining Family Islands, the officers are already looking forward to the final part of their trip when they return to New Providence to hoist the flag at Clifford Park on July 10.

One minute to midnight on July 9, 1973, the Union Flag was lowered for the last time as the official flag of The Bahamas.

One minute after midnight on July 10, 1973, a crowd of 50,000 gathered in Clifford Park saw the black, turquoise and gold flag of the Bahamas being raised, signalling The Bahamas’ independence.

The National Independence Flag is in Exuma today, Andros tomorrow and Bimini on Thursday.

Mr Moss said: “I’m waiting for the coconut tart at Andros now and I can’t wait for when we go to Clifford Park. It’s going to be an exhilarating and overwhelming experience.”