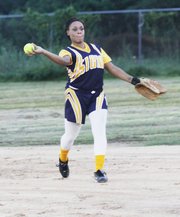 THE Lady Hitters remained on top of the standings in the women’s division of the New Providence Softball Association with a 12-5 rout over the Sigma Bracketts in the Banker’s Field at the Baillou Hills Sporting Complex on Saturday night.

The Lady Hitters, last year’s runners up, improved their front- running record to 6-2 as Thelia Johnson tossed a five-hitter. Ashanti Darville, who played last year with the Lady Hitters, suffered the loss on six hits.

Johnson also helped her own cause by going 1-for-2 with a home run, driving in two runs and scoring as many times. Monalisa Joseph also had a homer with two RBI in her 1-for-2 night at the plate, scoring a run and Melinda Bastian was 2-for-4 with two RBI and a run scored.

The Bracketts are now sitting in fourth place at 4-2.

Jeanette Hilton got the win on the mound and Diva Burrows was tagged with the loss. Hilton helped her own cause going 2-for-3 with a homer, driving in four runs and scoring three times, Dornette Edwarfds went 3-for-4 with a double, three RBI and three runs scored and Stephanie Goodridge had a perfect 2-for-2 night with two RBI and two runs scored for the Lady Operators.

The NPSA is slated to be back in action this week with the following games on tap: