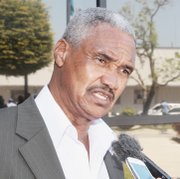 BEC chairman Leslie Miller has lashed out at former chairman Phenton Neymour in the on-going argument over operations at the country’s electricity corporation, dubbing him “clueless” and an “imbecile.”

Earlier this week, Mr Neymour criticised BEC disconnector salaries as “below minimum wage.” He also accused Mr Miller of using the protection of the House of Assembly to make unsubstantiated claims - including one that Mr Neymour never called a meeting with any of the management or executives of the company.

On Thursday Mr Miller dismissed Mr Neymour’s allegations and also pointed to the “high” salaries paid under the leadership of the FNM.

“This guy is clueless. He lives in la-la-world by himself,” Mr Miller said.

“This is the fellow who is accusing me of making mis-statements to the press and trying to use the House of Assembly to protect myself. Now who got to protect themselves from an imbecile like him who doesn’t have the slightest idea of what the hell he’s talking about.

“I look under the dictionary yesterday morning and I got out my thesaurus - the big one about 1,000 pages - and under ‘jackass’ they got: ‘moron’, ‘idiot’, ‘imbecile’, ‘ninny’, ‘nitwit’, ‘simpleton’, ‘jerk’ - and one I never heard of before, ‘ding-dong’ - whatever that one is. And I figure all of these probably describe the accusations made by this man.”

In his statement, Mr Neymour said that according to the chairman, BEC pays 25 disconnectors $12,000 a month. He said this means that the salary of disconnectors is “an average of $480 per month or approximately $110 per week.” He criticised it for being below minimum wage.

“I have been accused of lying or having blatant disrespect for the law with regard to the hiring and payment of contract disconnectors at BEC,” Mr Miller said.

“Let me set the record straight, the 25 contract workers in New Providence presently employed with the corporation are paid between $480 to $680 each per week - with $80 of that going for gas - not per month as stated.”

He said the figures quoted by Mr Neymor are “completely inaccurate, meant only to run from the idiotic decision to pay out so much money” to the 11 disconnectors that were employed under the FNM government and were paid salaries averaging $2,000 per week.

Mr Miller said tat one of those 11 was taking home almost $8,000 per month for a job “requiring minimal training and no specialised skill or advance education.”

He said: “All you really need is a car, BEC trains you for a week- two weeks, we pay you $300 while you’re being trained, your car is in good working order, the fellows give you the slip to say turn of 40, 50 or 60 people today and that’s what you do.

He also, yesterday, refuted Mr Neymour’s statement that he was using the protection of the House of Assembly to make unsubstantiated claims that he knows have no basis in fact.

Mr Neymour has disputed Mr Miller’s claim over his lack of meetings.

He had told The Tribune: “One of my first activities as a Minister in the Ingraham Government was to meet with members of the Board of both BEC and the Water and Sewerage Corporation followed by executive managers.”

This is one politician that doesn't give a crap and tells it like it is. Congrats Mr. Miller - keep doing the right thing.

The whole service needs to be audited to weed out these inefficiencies. Start with NIB and Housing.

Tthesaurus? Well at least he isn't the PM, the last clown we had didn't even know what a hologram is.

I was actually being sincere in a backhanded way:) It's evident that Mr Miller doesn't have the best command of the English language. It's a good skill to have, but if you can get your point across, i.e. communicate, effectively, it's not such a big deal in my book. The fact that he brought it up says to me that he realizes a weakness and is trying to do something about it. I like that. I admire it. (side topic) I truly believe that in our schools we should not only give awards for the best grades but also for those who have shown good improvement. Go beyond a single "Most Improved" award. If you went from D to C, you should get an award...but it has to be through consistent effort, evidence that someone is trying to improve, getting 2 A's and failing everything else would not be a qualifier.

Something for maintenance too, that's equally, if not more, important. If you keep your grade level for 1yr there's another incentive and so forth for maintaining for 2,3,4yrs.

Anytime people speak sense Mr Miller uses this type of trickery to diffuse the situation and confuse the Bahamian public. He isn't no nonsense he is just full of hot air. All these claims and my light bill still high. Bahamians love a man who is a good talker. If he was doing such a good job my light bill wouldn't be so high. Fire those workers who thieving, buy lower costing fuel,privatize BEC. Do something cause this bag of long talking and I still see money flying out my pocket. Or is it simply your intention is not to help the Bahamian people. Is your intention to be a distraction while you and your PLyingP cohorts rape this corporation while we foot the bill? TIRED of all these windbags let's see some action!

Yes all talk and no action, like the wutless pathetic FNM. Those FNM traitors economically raped and pillaged this country for 5 whole years and anyone that still supports them are no good traitors.

It looks to me like Mr. Miller is doing his best to clean up the mess at BEC and he deserves our support.

That said, the root of the problem is public ownership and the intrusion of politics into the operation of one of the most critical of national infrastructures.

It is obvious to anyone who is willing to be honest that the BEC needs to be privatized. A governmental oversight function may be employed, but the day to day operation of electric utilities cannot be a football used by successive governments to pay off their supporters if you expect the efficient delivery of utility services.

Can't we stop pretending and find a good private operator to take over this critical function?

Hilarious! I love this man. He tells it like it is!

Regardless of who is an imbecile, a ding dong an idiot a clown, something is not right at BEC. There are BEC consumers, on the one hand that are having their lights disconnected more that twice in the same month (Thirteen times in one year!) and their account does not go beyond 30-45 days. Yet there are consumer, hotels and politicians, that seem to go year to year and not pay any bill. So on the one hand BEC is disconnecting consumers who are attempting to pay bills and bring revenue to the corporation in favor of those who are consuming electricity and not pay. No business can operate like this for long. And neither can a business sustain itself by paying its employees grossly outrageous salaries to di simple, menial tasks. While companies may not always want to hire the cheapest labor on the market they seek out workers who are reliable, affordable and productive. Those who are responsible for the public purse of this country do us all a disservice when they allow public funds to be misused, abused or stolen. What would this country be like if BEC really had to shut off its own lights and close its doors because of lack of funds due to gross mismanagement?

I can't believe people are getting so excited by either of the Idiots. This is precisely the problem in the Country: We the people do not have an original thought in our heads, Lap up this drivel like no tomorrow, but love the dog fights!!

The only reason why they do nt sell idiots in the Bahamaz is because they too c Common to value anything. If you dnt believe me jus look at the post above

The last time that Mr. Miller was in the government, he was touting Petro-Caribe and cheap Venezuelan oil. He was willing to trade away Bahamian sovereignty and put the Bahamas in the thrall of the psycho Chavez. Chavez is dead, the Venezuelan economy is dead. There would have been no more cheap oil, and we would have owed the country to Venezuela.

It is scary to think that intellectual lightweights like Mr. Miller, who on top of his deficiencies in the intellectual department, cannot string together a sentence in coherent proper English, is in charge of a vital service for the country. There is no hope.

There's always hope:) like I said, he bought a thesaurus:)

Seriously, the problem right now is that there is a huge % of the population who are of the belief that we are "Ok". 5 days or so ago, the Deputy Prime Minister was one of them, unfortunately he got a rather unpleasant wake up call. The question right now is exactly what will it take and how long will it take for the larger % of the population to realize there really is a problem...and not just with the PLP or FNM, but with the entire system. It cannot be that every 5yrs we try out a new set of incompetent people and then hold our breath till the next election hoping they don't sell the islands from under our feet or rape NIB and the public treasury .

We need to first offer then elect sensible, competent, ethical, honest, hard working, wise men/women in each and every constituency and there needs to be a system of accountability within that 5yr term. (We need more investigative reporters).

I believe it can happen, I'm just hoping we don't have to go through 10 plagues and fall on our faces in sack cloth and ashes to get there.