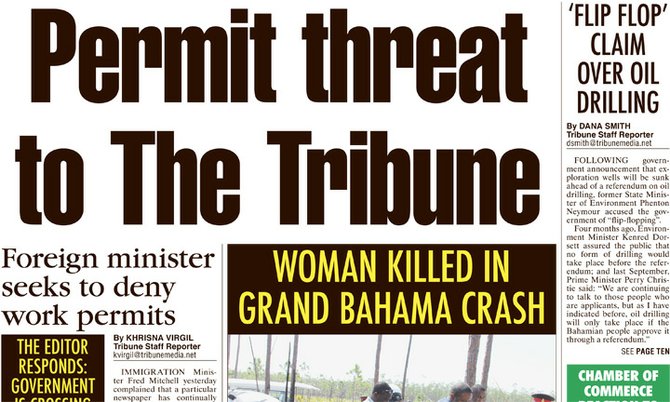 IMMIGRATION Minister Fred Mitchell yesterday complained that a particular newspaper has continually petitioned for work permits to run its business while there are Bahamians capable of that duty.

While the Minister did not mention which newspaper he was referencing, he said the Immigration board feels that no further permits should be granted to the company.

The comments were made during his mid-year budget address in the House of Assembly.

“One of the newspapers,” Mr Mitchell said, “continues to ask for work permits to manage their newspaper. There is no question in the minds of the board that this paper can be run by Bahamians. This is a case where on appeal we have asked that an understudy be identified.

“One final work permit has been granted.”

He further noted a law firm in a similar situation, but a compelling case of why the permit should be granted was made.

“We granted a work permit to a law firm to manage their business. They pleaded the case that this was a specialized skill not available in the country.

“The Bar Association opposed it. The lawyers in their own firm opposed it. It is unlikely in those circumstances to be granted again. The management of the firm made a compelling case.”

That's because the minister wants to silence the freedom of the press with a newspaper that does not buy his particular brand of disingenuous koolaid. (And for the benefit of the followers of his party, disingenuous means lying).

The law firm made a "compelling case" huh? I'm sure they did. If Bahamians are their top concern, and both the Bahamians in the firm itself PLUS the Bar opposed it, but they still granted the permit - I wonder what was the nature of that "compelling case" made.

I'm with Fred on this one. After almost 100 years in business the Tribune still wants a foreign editor? NO WAY!! I say deny the permit flat out and let a Bahamian do the job. There are MANY Bahamians that can edit a newspaper. Ms. Caron needs to start believing in Bahamians! Get her Fred, you got my support on this one!

Comrades the critics of minister Fred are the same damn people who lost power because they thought it was OK to apply and expect their work permits to be rubber-stamped by DPM Brent, as long as they would just scream louder that there were no 'qualified' Bahamians to fill their paycheck vacancies.

One damn sure thing about Comrade Fred is that he will not listen to the employers "crying wolf" in-fluxing our Bahamaland with foreigner permit holder workers, while Bahamians stand idly by and be expected to watch the foreigners food store buggies being pushed up and down the isles. all full-up with meats and stuff, all while their buggies goes empty?

This is one minister who you will not bully around with words, regardless if it be in Spanish, Jamaican Slang or Creole.

Well a Pandora's Box is now being opened! Lets see what happens now?? What is good for one is good for all. No curry favour, especially those who keep these expiates hired here as indentured servants! They need to go after those employers who do this kind of thing. You know something, the Government knows who they are!!!! They will sell their own Children into Slavery!! The innocent will always suffer for the guilty.

I totally agree with Mr. Mitchell.

Finally, I have something to like this Government for. This is LONG OVERDUE! Go Fred!!! Now we need to go higher up the chain. Unfortunately I don't think average Bahamians will be rushing to fill these vacancies (maids and gardeners) although on the other side of this, the illegal foreign element may finally be frustrated out of the country - we hope!

THEY CAME FIRST FOR THE TRIBUNE AND I REMAINED SILENT (MASH UP THOSE MONEY GRABBING EASTERN ROAD RICH FOLKS.) THEY CAME NEXT FOR THE GUARDIAN AND CABLE 12 RADIO AND NEWS PAPER ( TAKE THEIR VOICES AWAY I CANT STAND DARROLD MILLER AND JEFF LLOYD).

THEN THEY CAME FOR ME. .

Sounds like Judicial Terrorism, misuse of courts and government force to stifle the truth.

First let me state that I firmly agree on the Mr. Mitchell's general principal of giving precedence to the local labor pool when qualified. Any given country is obligated to look after its own people's rights first. As an American, I would want my country to hire me before hiring foreign labor when and if I am the most qualified candidate. But I would NEVER expect any company to hire me simply because I am American. Furthermore, I would NEVER expect a legally established, valuable employee to be dismissed simply because he or she isn't American. If this employee was allowed to work for the Tribune for 15 years legally and establish a life in the Bahamas, it is heartless to suddenly say he is now unwelcome through no fault of his own.

Competition drives a strong work ethic and quality customer service. Entitlement in any form drives laziness and a total disregard for service. When describing the effects of a championship, Pat Riley of the Miami Heat said it best. "When a milestone is conquered, the subtle erosion called entitlement begins its consuming grind. The team regards its greatness as a trait and a right. Half hearted effort becomes habit and saps a champion."

I am an American tourist who is now scared to return to your country after my husband and I were stranded because of an emergency. We simply needed help from our insurance company to get us home, but work permit policies prevented our insurance from hiring the resources we needed to accomplish that. When we met your Department of Immigration directly to explain it and ask for help, we were met with open hostility and total lack of concern. Considering more than 60% of the Bahamian GDP is tourism, I was shocked to have been treated with such disdain. Even the locals we got to know over our month long time in Nassau said they were embarrassed on behalf of your country that we were treated so poorly.

When speaking of immigration issues and policy enforcement, Mr. Mitchell once said, "At the same time, we do not want an atmosphere of harassment of individuals." If you are reading this Mr. Mitchell, I'm afraid that is what is happening sir. I beg you to consider the human side of your strict policy and realize that sometimes, exceptions or compromises must be made. Not everything is black and white.