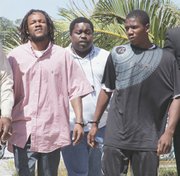 TWO men were remanded to Her Majesty’s Prison yesterday after being charged in Magistrate’s Court with two separate murders.

It is claimed that on March 2, he intentionally caused the death of Ketario Armbrister.

On the morning in question, police discovered Armbrister lifeless inside a silver Honda CRV jeep with multiple gunshot wounds.

Bethel was not required to enter a plea to the charge due to the nature of the offence.

He was told that his case would be fast tracked to the Supreme Court for trial through a Voluntary Bill of Indictment scheduled to be served on July 2. Bethel had retained attorney Shaka Serville.

In the second arraignment, 36-year-old Jamal Morley of Market Street also faced a charged of murder in connection with the March 4 death of Elroy Wilson, a man awaiting trial for robbery and attempted murder.

On the night in question, Wilson was found semi-conscious by police with gunshot shots to the stomach and upper left side of his back.

He was wearing an ankle bracelet.

He was taken to hospital by ambulance, where he died a few hours later while undergoing surgery.

Morley was not required to enter a plea and his case will be fast-tracked to the Supreme Court for trial.

This VBI is also scheduled to be served on July 2. He is represented by Ian Cargill. Both Morley and Bethell were remanded to prison until completion of their trials.