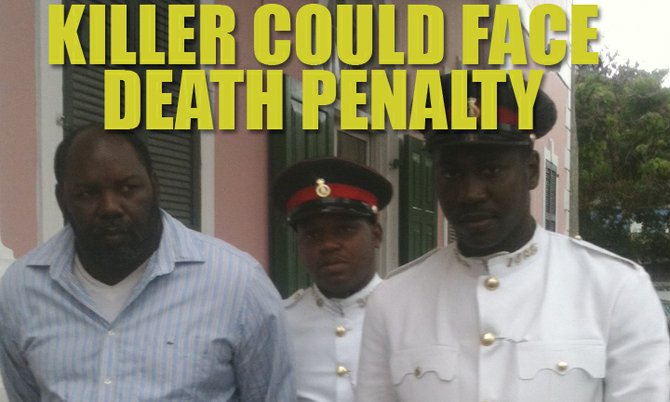 A JURY unanimously decided in two hours yesterday that Simeon Bain was responsible for the throat-slashing murder of a fast food restaurant manager that began from a plot to seduce the young man before robbing him and the highway franchise.

Bain was silent throughout each announced verdict when he was unanimously convicted of all the charges he faced save for attempted robbery concerning the September 19, 2009, death of 21-year-old Rashad Morris.

And when asked by Justice Indra Charles’ court clerk if there was any reason why sentence should not be passed on him, the case’s lead prosecutor and Director of Public Prosecutions, Vinette Graham-Allen, immediately announced the Crown’s intention to seek the death penalty under the court’s discretion.

Justice Charles then ordered that a psychiatric and social inquiry report be submitted to the court on or before June 17. She also requested that the Crown submit a sentencing bundle on June 19 with authority cases supporting their request.

His sentencing was adjourned to June 21 and afterwards he was handcuffed and escorted out of court to remand at Her Majesty’s Prison.

The Tribune spoke with the victim’s elderly mother, Louise Morris, who considered the outcome of the two-week trial “justice served”.

“Justice is served because my son didn’t deserve that – you understand me?” she said.

Ms Morris, who agreed wholeheartedly with the prosecution’s decision to choose the death penalty, said she is haunted every night by the image of his death.

“I see him almost every night and the last time he get cut, that must be when his neck was cut and he just hang his head on the side. I seeing all this.”

Morris was kidnapped from the Charlotte Street branch of Burger King and taken to the Tonique Williams-Darling Highway branch, where he had been the manager.

He was ordered to open the safe. After failing to do so, he was stabbed in the restaurant’s parking lot before his throat was slashed.

Before yesterday’s verdict, Bain spent three hours on Wednesday attempting to convince the jury that he did not seduce, kidnap, rob or kill Morris.

Bain’s defence started with a replay of security footage of the incident, which he questioned.

He then said that with regard to his girlfriend’s evidence to the court at earlier hearings, she “spoke a lot of hearsay”. Bain asked the jury to recall that the woman could not recall the surname of her own cousin.

He suggested that her denial of their relationship discredited her as a credible witness – because she testified that not only did they exchange numbers after he “blew a kiss at her” but she then lived with him in his mother’s house.

“She didn’t come back until the end of April,” he said.

He told the jury that they had seen the woman admitting to being mixed up about a visit she made to Morris.

“Someone speaking the truth wouldn’t get mixed up. Someone telling lies would get tangled up in their lies,” he said.

Bain said that on the day of the murder he had reported his car stolen to police and on December 31, 2009, he claims he was called into the Central Detective Unit where he was “beaten” into confessing to the murder.

He referred to the testimony of the female witness that she saw him on the ground in the CDU, and he said it was “against policy rules” to have a person on the floor unless they were in a cell.

Bain told the jury they should not accept the record of the interview that police claimed he gave them.

Prosecutor Darnell Dorsett asked the jury to note that Bain never refuted any of the woman’s testimony during cross-examination.

The woman had said Bain was right handed, said the prosecutor, who referred to the evidence of pathologist Dr Caryn Sands that injuries of the nature inflicted could’ve only came from a knife but that the person who slashed Morris’s throat was right handed.

Bain also had phone records produced which showed no communication or transactions between the numbers registered in his name with the number registered to Rashad Morris.

The prosecutor noted yesterday that while those registered in his name didn’t show any such communications, she submitted that he was distancing himself from an unregistered number that is on the same phone records.

“He’s a smart fellow. He didn’t want to be tracked because he knew what he was going to do,” the prosecutor claimed.

The prosecutor dismissed Bain’s claims that police were conspiring against him and that they beat him into giving them a detailed record of the interview on December 31, 2009.

She said that while the witness did see Bain on the ground, “she told you she didn’t see police hit him or that he complained to her about being beaten.”

Justice Charles yesterday completed her summation of the evidence at 2:30pm before she excused the jury to deliberate on their verdicts. They returned two hours later and unanimously convicted Bain on all charges save for attempted robbery.