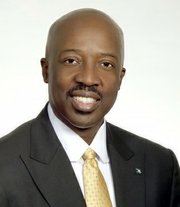 THE government will do all it can to pursue money paid out in National Insurance bonuses if it is found that they were obtained without proper authorisation, according to Labour Minister Shane Gibson.

This admission came as a shock to many as up to this point no one in the Christie administration has made a reference as to what is to come next in the NIB situation which has gone on for months.

Mr Gibson had been questioned continuously on whether legal action would be taken against suspended NIB Director Algernon Cargill and axed Chairman Greg Moss, but on several occasions he said he was unsure.

“If it is found that the funds were gotten illegally,” he said, “I will pursue it to the fullest extent of the law.”

Mr Gibson was a guest on a local radio talk show on Wednesday night when he answered questions from callers about NIB.

While The Tribune was not able to contact Mr Cargill’s lead lawyer, Alfred Sears, after several calls and an e-mail, the legal team has insisted that all false allegations and misrepresentations of their client will be fought.

He had asked this newspaper to contact him yesterday on the next steps for his client allowing him time to become familiar with the audit report they received.

As an official release of the audit reports in their entirety have yet to be released. It is still unclear if the government-contracted auditors, Grant Thornton, found anything incriminating against Mr Cargill.

In view of this, FNM Chairman Darron Cash earlier this week called on Mr Gibson to reveal the much touted “shocking” details of the report.

“With respect to the Minister’s continuous reports of shocking revelations the question is: “Where is the beef?’

“This is a giant smoke screen and a diversion from Mr Christie’s one year anniversary of failure and incompetence” he said.

“The cost of this exercise has been considerable and the government has paid a fee price in its credibility.”

If it is found? Don't you have the report? Man the PLP is so dishonest...

Was trying to listen to minister Shane on the Darold talk show but his mouth is always running faster then he brain, something which can only invite trouble for your PM.

Apparently, Shane has this problem with acknowledging that it is the PM who selected Moss for NIB? That he as the minister for NIB is but a servant of the PM. That he has no authority to appoint or fire anyone over at NIB?

Likewise, Hubert selected Cargill, but unlike his former, trusted law partner he never paid attention to the go'in on's over at NIB? The same goes for Hubert's state minister for finance Zhivargo?

Minister you can relieve some that head spinning pressure, if only you could just answer one single question put to you without some political spin?

I said from day one, that Comrade Shane's was one of three personalities that was too risky to return to cabinet or chairmanship's? At this moment, I stand with my same opinion that he and a couple of others are much too risky personalities to be anywhere near the affairs of a rational thinking government.

Slightly confused by the multiple statements made in the media. "Forensic means "suitable for a court of law. Forensic audits are conducted by firms with specialized training. The report determines the how, where, why and who". If this report was created by accountants with this specialized skill and contained facts of sufficient quality for presentation in a court of law and listed shocking details....why doesn't the minister know? How much does a forensic audit typically cost? Why don't we know the cost of this audit if the report is completed? What percentage of the bonus pay is the audit total cost? What was the fee originally contracted with the auditors and what were the terms?

@Tal if you still stand by your words then Chrisite is to blame. And you voted for a useless leader who everyone knew would do the same thing again once returned to the helm. Whats your excuse for a wasted vote? Hold him accountable,,,,and if you know now what you knew then you voted color not whats best for the country. (hence our country's problem) We the younger generation will save this country when the old guard is gone.

See Shame is still pissed off because you guy's caused him to return his bright new Rolex! Do you ever think about your old sweet heart Shame?

My Dear Comrades, my Bahamaland cares not if your citizenship, residency or work permit is of the black, white or mulatto colour.

Might I remind you red shirts who come on here wishing to divide our Bahamaland that the PLP was officially brought about by Comrades Henry Taylor, William Cartwright, Cyril Stevenson, all three were more white skinned than black.

I have never been exactly sure what the true makeup color is of the red shirts. But I do know what colours is the faces of the same old Bay Street Families, who still controls the party's campaign purse strings? To that end, none us are confused. Right?

(REDS)Hey Look ..LOOK THE SKY IS FALLIN... (YELLA) O no the sky is not falling, that is Shane Gibson's shocking revelations about NIB ((REDS) O THAT...zzzzZZZZZZZZ

YOU PEOPLE DISPLAY YOUR STUPIDITY IN YOU RESPONSE TO YOUR MONEY BEING STOLEN. Idiots! Instead of you being upset that these thieves stole from you and the poor as wellas your government, you dismiss the facts and make political stands. anyone found stealing that blatantly and being that dishonest with oublic funds should be charged with embezzlement and stealing by reason of employment. they should be made to return the funds and face the justice system! Bunch of friggin thieves!