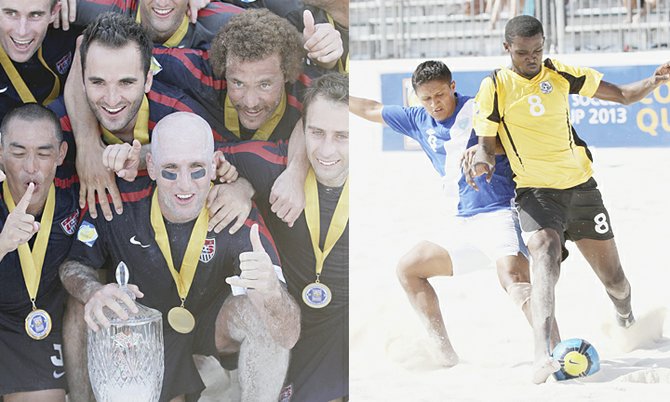 They fell short of the ending many anticipated, but a gallant effort by Team Bahamas ended with a loss on penalty kicks in their final game of the CONCACAF World Cup qualifying beach soccer tournament.

The Bahamas lost 6 (0) - 6 (1) to Guatemala yesterday and finished the tournament in sixth place.

After Nesley Jean missed the opening penalty shot, Guatemala’s Eduardo Samayoa successfully converted to give his team the win, a fifth place finish and redemption for an earlier loss to the Bahamas.

Closely contested throughout, the game came down to a dramatic finish with two scores in the final minute of extra time.

Tied at 5 at the end of regulation, Wilson Gonzalez gave Guatemala the lead with the 29 seconds left to play, seemingly sealing the Bahamas’ fate, but Hanna would respond when his team needed it most.

Hanna answered with a goal straight from kickoff to tie the score and eventually send the game to penalties.

“I did it before and at that point I just wanted it so much, it was a time for someone to step up and take control of the game and that’s what I tried to do,” he said. “We put in a good effort, we fought until the end and unfortunately lost on penalties. In that situation it can go any which way, it’s 50/50, we were unlucky this time but the team is seeing a definite improvement and we are excited about moving forward.”

The Bahamas got out to a 3-1 lead in the second period after a Williams score and Hanna scored his first goal of the game at the 4:23 mark in the second.

Guatemala would go on a two goal streak of their own with scores from Gonzalez and Luis Valencia to tie the match 3-3. They took their first lead of the game on a Valencia goal minutes later, but Forbes would tie the game at four with 5:42 left to play in the second period.

Gonzalez gave the Guatemalans a 5-4 lead, and in the game’s waning moments, Williams delivered a header to again tie the game at five with 2:14 left to play.

The Bahamas finished the tournament at 2-2 with wins over Puerto Rico and an earlier win over Guatemala. The United States won the CONCACAF Championship with a 5-4 win over El Salvador.

Both teams qualified for the 2013 FIFA Beach Soccer World Cup in Tahiti.

“Bringing the tournament here was a big ordeal, we knew the potential of it for quite some time and that’s why the team put so much work into it. The team has been working tirelessly in and out. We went to bed every night with the next game on our minds thinking of how we were going to come out and perform, what game strategies we could put in place, and how we could bring a win home. The federation has been behind us one hundred per cent of the way, we came out here and we tried our best and left it all on the pitch,” Hanna said.

“The next step is to get back to the drawing board. We came up short here but we can’t stop at this point. We have to keep training, there are going to be more competitions coming up in the future and we must be prepared whenever the call is we have to be ready to go.”

“The team played very well, they fought all the way to the end. We made a few mistakes. When we play at a high level, in these international events, we cannot make these mistakes. We have to minimise the mistakes because the team with the most mistakes will lose the game. I’m very proud of my players because they fought so hard. We had this team together only three years and in beach soccer that’s nothing. We just started ‘yesterday’ and many of these teams have been together for years. But we have very good players, we have a great future and I know the Bahamas can qualify in the next World Cup qualifier, I know we will qualify,” he said.

“Coming into the tournament we came off some very, very difficult games against some of the top teams in the world like Brazil and Spain and Mexico, then we came here to play here at a high level, but I know the team felt very tired after playing so many games in 10 days. We started to break down due to injury, but the performance of the team, in my view, was even that much better by the players because they pulled through. I feel sorry that we didn’t qualify because we have a great team. We have great new young players coming up who are very attracted to beach soccer so the future is bright. We have to keep training because we have several events coming up in the near future and I hope we have the team very strong again so we will be able to fight for first place.”